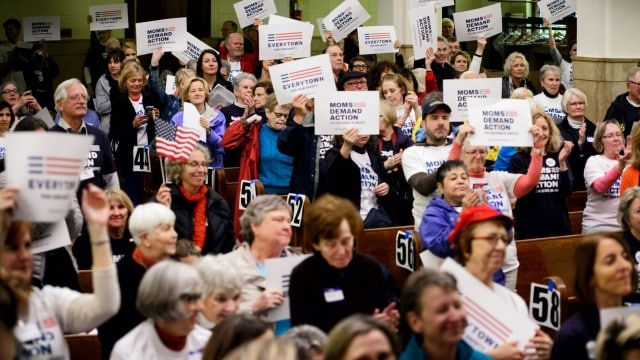 Some 300 gun control advocates swamped the Minnesota State Capitol this week over a pair of proposals whose sponsor admitted were dead on arrival.

The bills, to mandate universal background checks for virtually all gun transfers and to establish gun violence restraining orders, were submitted after the deadline to hear new legislation and the lawmaker behind them argued he had not submitted them sooner because he felt they had thin chances making it through the legislature.

“The citizens of Minnesota are demanding that we take some action on this and we take what steps we reasonable can to try to reduce gun violence,” said sponsor Sen. Ron Latz, DFL-St. Louis Park. “This is not going to solve all the problems — there’s no questions about that. But it seems to me it’s a very concrete first step we can take.”

Latz’s bills, Senate File 2493 to expand mandatory background checks to include private gun sales and Senate File 2980 to enable law enforcement or family members to petition a court to seize the firearms of a person they feel is in danger without a provision to offer treatment or evaluation, were backed by a huge crowd from assembled anti-gun groups.

The gathering of gun violence survivors, faith leaders, and law enforcement lobby organizations was estimated to run as high as several hundred.

“Everyone here today comes from different backgrounds, politics, and points of view — but on the issue of preventing gun violence, we have one clear voice: there are common sense solutions like criminal background checks for all gun sales that will help save lives and we will not stop until our leaders act,” said Marit Brock with the local chapter of Moms Demand Action in a statement.

However, some in the chamber were not enamored with the three-hour debate in the Senate Judiciary Committee over bills that were essentially non-starters.

“I’m kind of questioning why we are having this hearing today when it’s not designed to have any conclusion,” said Sen. Warren Limmer, R-Maple Grove.

Second Amendment groups on hand for the informational hearing argued the entire event was staged for political points.

Rothman contends even if the bills were actionable and did make it into law, they would do little to stop crime.

“Murderers, the drug dealers, the muggers are not going to say oh well if there’s a law we should go down and do it. They’re going to continue to buy those guns out of trunk at 3 am behind the bar,” said Rothman.

The legislation will not be scheduled for a vote this session.