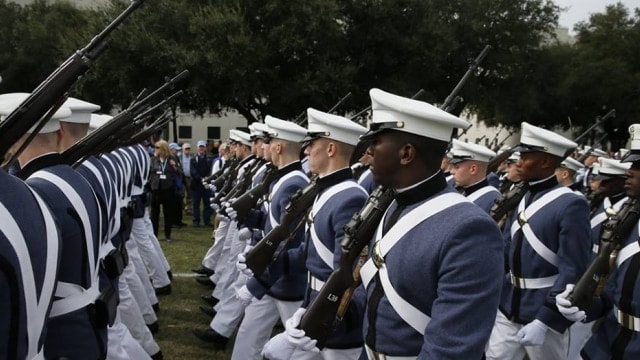 The Military College of South Carolina, commonly referred to as The Citadel, has some 2,300 cadets, each of which is mandated to pass an ROTC course every semester. (Photo: The Citadel)

The state-funded military academy has long celebrated its historical role in the Civil War, which included firing on a Union supply ship in the tense period just before active hostilities broke out, and has kept the flag as part of displays on campus.

This didn’t sit well with one of the Palmetto State’s delegation to Washington.

“You’ve had students, there are Citadel students, who have been asking for that flag to come down,” U.S. Rep. Jim Clyburn, D-S.C., told the Post and Courier, “and I think it’s a damn shame that state officials in South Carolina continue to fly in the face of their black people. And that’s what’s happening here.”

The galvanizing event that turned public opinion against the old Confederate symbol was last summer’s shooting at the Emanuel African Methodist Episcopal Church in Charleston where a white supremacist with a criminal record killed 9. Images of the alleged shooter posing with the “Stars and Bars” led to a backlash that saw the flag removed from a number of public places across the state and country.

The Citadel Board of Visitors voted 9-3 last year in favor of moving the Confederate Naval Jack from Summerall Chapel, where it had hung for years, to another location on campus.

For his part, Clyburn introduced legislation at the time to close what was termed “The Charleston Loophole” when it became known that the suspected shooter was able to obtain a firearm after his three-day delay expired without the FBI able to confirm that he was a prohibited possessor.

With the flag still somewhere on the grounds of the Citadel, Clyburn this month reached out to U.S. Rep. Adam Smith of Washington State, the highest-ranking member of the House Armed Service Committee, to sponsor an amendment to the 2017 National Defense Authorization Act cutting Reserve Officers’ Training Corps funds to any institution that flies a Confederate flag.

The South Carolina school, which has participated in ROTC for nearly a century and requires that every cadet successfully complete a course in one of four ROTC departments each semester, is the only one that fits the guidelines.

Clyburn noted that a Citadel graduate was one of those killed in the church massacre.

“Americans’ tax dollars should be directed to institutions free of symbols of hatred,” said Clyburn.

The measure tanked along party lines early Thursday as the NDAA was passed out of committee without it.

While Smith’s office did not release an official statement, the Congressman did take to social media in a series of tweets bemoaning the amendment’s failure.

My amendment would withdraw military support for an institution that displays the Confederate flag. This is meant as a forcing mechanism.

Republicans Vote to Keep Confederate Flag at The Citadel #FY17NDAA