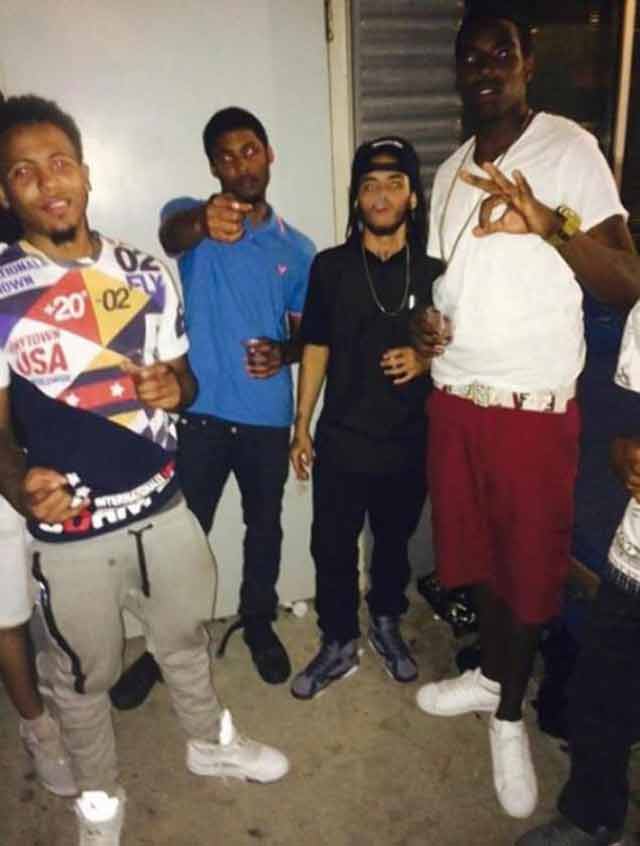 Kadeem Bacote is seen in this undated photo hanging out with some buddies. (Photo: Brooklyn U.S. Attorney’s Office)

A 24-year-old known gang member will likely spend the next decade behind bars after he was found guilty Thursday in a New York court for charges of illegal handgun possession.

Kadeem Bacote was wounded in June 2015 during one of a rash of summer shootings. But prosecutors say he essentially asked for it by wearing a ridiculous pair of blue pants.

Cabote, a Bloods gang member, apparently thought it would be clever to wear a pair of blue pants covered in Band-Aids, but his cleverness backfired.

“(An NYPD cop) was so surprised seeing this, that he actually stopped to talk to him and said, ‘What are you doing walking around here dressed like that?'” Assistant U.S. Attorney Artie McConnell said in court this week.

“And what does (Bacote) tell him?” McConnell continued. “He identifies himself as a Blood. He says, ‘Actually these blue pants are meant to be disrespectful to the Crips. Look at the Band Aids that I’ve placed on them.’”

The ploy apparently worked and Bacote was supposedly shot by rival Crips. But two weeks later authorities received a tip that Bacote was back in town, this time packing heat.

“Two weeks later to the day, he’s back on the same street, on the same block, except this time he’s the one who’s armed,” McConnell pointed out.

Sure enough, officers recovered a .38 revolver and Bacote, who at the time was already a convicted felon thanks to a prior robbery, was slapped with yet another felony.

The defense, however, questioned the validity of the officer’s account of the whole blue pants incident.

“It is very incredible to the point of being insane,” said defense attorney Mia Eisner-Grynberg. “You got this young black man supposedly on a bad block in Bed-Stuy wearing this outfit that is so crazy that this gang officer has never seen something like it in his life.”