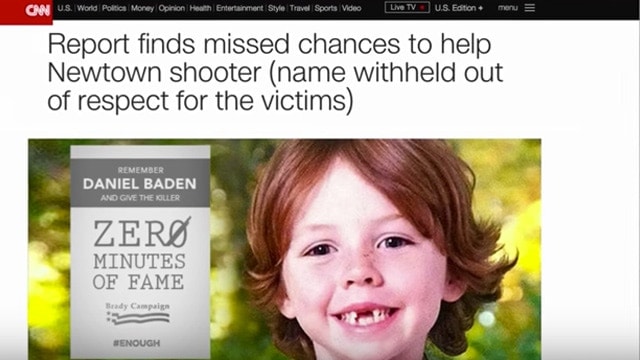 On Thursday, the Brady Campaign posted a two minute spot online for their Zero Minutes of Fame campaign billed to scrub the names of notorious killers from search results. They swapped it out for a 14-second one on Friday.

Then on Saturday, the group trimmed the original video to just two seconds, while uploading yet another one-minute PSA.

As reported previously by Guns.com, the vehicle these PSA were meant for is a free downloadable Google Chrome plug-in that aims to anonymize infamous murderers and their deeds, swapping out the names and images of  notorious shooters with that of their victims.

However, some disagreed with the use of the victims and perpetrators side by side and noted the group even misspelled at least one of the victim’s name.

A Change.org petition begun just hours after the campaign’s debut, blasted the group.

“This ‘Zero Minutes of Fame’ campaign sets us all back,” reads the petition. “It demonstrates poor judgment and a lack of empathy for victims of gun violence for whom seeing mass murderer’s faces and hearing their names repeatedly prompts PTSD symptoms. This is something that Brady President Dan Gross should already know.”

This led Brady Campaign to pull the PSA for retooling, though they came short of an apology in a post to social media Friday.

We have heard from our supporters and we understand and respect their concerns with the public service announcement we released earlier this week. As you may have seen yesterday, we’ve already taken action to address those concerns. We’re also working on a new PSA that will raise awareness about the problem of notoriety for killers. We take the input of victims and survivors very seriously. We remain committed to the effort to deny killers the fame they seek and raise up the voices of victims of gun violence.

[T]he PSA has been removed until we can post an updated version. We have heard from our supporters that the use of images and names of killers, as well as victims, was insensitive. We understand and respect those concerns and are taking action to show the problem with notoriety of killers in a more sensitive manner.

However, as of Sunday, the Brady Campaign’s retooled Zero Minutes of Fame program is still earning it’s own infamous mark from some gun violence survivors.

Supporters of the petition have left some scorching remarks.

“My wife was murdered at mass shooting in Alturas, California on Feb. 20th, 2014. I find this app to be exploitative to victims and survivors,” posted Philip Russo of Redding, California. “It is just a ploy to commercialize and profit off the tragedies of victims of mass shootings.”

This article has been updated to reflect the changes made in the Brady videos.