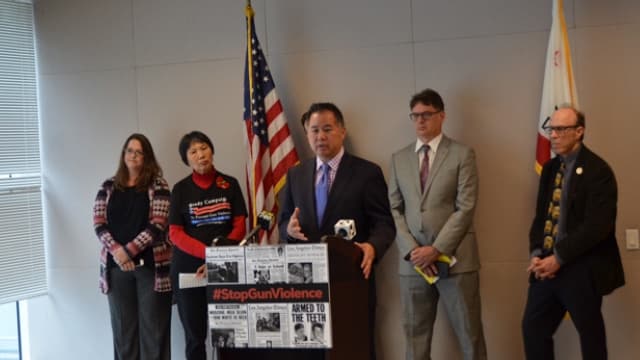 Assemblymember Phil Ting feels that employers, teachers and health care workers are likely to see the warning signs that someone is a danger and be able to have their guns impounded for up to 21 days. (Photo: Phil Ting’s office)

A bill that would broaden the pool of those who could seek an order from the court to seize a person’s guns is headed to California’s Assembly floor.

Introduced into the legislature in February, the move to expand who could file for a gun violence restraining order (GVRO) in the state passed the Public Safety Committee in a 4-2 vote last week.

The proposal’s sponsor feels the more people who can seek the intervention of the courts to prevent a tragedy, the better.

“The shock of mass shootings has become routine, especially at schools and workplaces. We need this bill to stop the carnage and save innocent lives,” said State Assemblymember Phil Ting, a San Francisco Democrat, in a statement. “All of us should be able to send our kids off to school and make a living free from the fear of becoming a gun tragedy victim.”

Ting’s bill, AB 2607, would allow an employer, a coworker, a mental health worker who has seen a person as a patient in the prior six months, or an employee of a secondary or postsecondary school that the person has attended in the last six months, to petition the court for a GVRO. Under current law, only an immediate family member or a law enforcement officer may do so.

In 2014, the original GVRO bill was introduced just days after the Isla Vista killings, to provide a framework for the temporary seizure of guns from an individual as a sort of pre-crime mitigation. The law allows the seizure, for up to 21 days, from an otherwise legal gun owner who is believed to pose a “significant danger.” This initial order could be extended for as long as a year if the situation warrants and filing a false petition is a misdemeanor offense.

California is the first state to implement this sort of far-reaching measure, which took effect at the first of the year.

Gun control groups stand with Ting on the expansion.

“Two years ago, the California Legislature enacted the GVRO law to provide Californians with an important preventative tool to reduce the risk of mass shootings and gun violence in our state,” said Ari Freilich, an attorney with the Law Center to Prevent Gun Violence.

“Unfortunately, this valuable tool remains unavailable to other community members who may have unique personal knowledge of a person’s mental condition and threats to perpetrate violence,” continued Frelich. “AB 2607 would help close this gap by empowering teachers, co-workers, and mental health professionals to ‘see something and say something’ by filing a sworn petition to a judge when they observe serious threats of impending violence.”

Second Amendment groups such as the Firearms Policy Coalition, National Rifle Association and Gun Owners of California, who have long felt the orders were a dangerous pathway to gun confiscation without delivering any promise of treatment for someone in legitimate crisis, are opposed to the expansion.

“Gun owners are being targeted for harassment in AB 2607 by virtually anyone they are connected to; disgruntled former colleagues or anti-gun college professors – but what is truly disturbing is that AB 2607 goes so far as to discourage gun-owners from seeking counseling or therapy – for fear of being raided by police and losing their gun rights,” said Craig DeLuz, director of Legislative & Public Affairs for the Firearms Policy Coalition, in a statement emailed to Guns.com. “This bill causes a serious breach of trust between patients and healthcare professionals as well as students and instructors.”

A full floor vote could happen as early as this week.