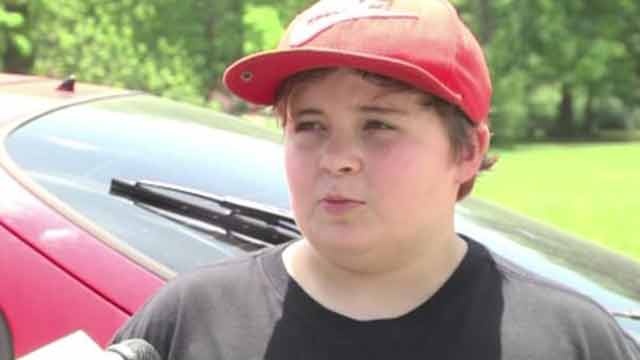 Chris Gaither told reporters that his stepdad taught him how to shoot. (Photo: WVTM)

A repeat burglar got more than he bargained for when he was met by an 11-year-old boy at the Talladega home he targeted and was subsequently shot in the leg.

Chris Gaither, 11, is a homeschool student who was home alone Wednesday morning around 9 a.m. when he heard a noise. The boy’s mother told local NBC affiliate WVTM that their home has been burglarized several times in the past. Sure enough, just as Chris suspected, someone broke in again, made his way through the house and up the stairs.

Meanwhile, Chris, who was fearing for his safety, retrieved a 9mm handgun and soon thereafter came face to face with the intruder who was carrying a clothes hamper which was presumably full of loot.

“When he was coming down the stairs, that’s when he told me he was going to kill me, f-you and all that,” Chris said.

The intruder apparently showed no fear to the young lad and kept walking, straight out of the front door.

“When I pulled the gun, I guess he didn’t think it was a real gun because he kept on walking,” Chris said.

But the gun was real and Chris unloaded on him, firing a total of 12 shots and striking the suspect with the final bullet as he attempted to jump over a fence outside. Chris said the full metal jacket went straight through the hamper then through the back of the suspect’s leg.

“He started crying like a little baby,” recalled the 11-year-old.

Carl Wesler, who lives next door, told reporters he had just came up on his porch to rest after walking his dog when he heard gunshots. He said at first he thought it was probably just someone shooting a snake.

The wounded suspect was transported to a local hospital for medical treatment.

The incident is still under investigation, and although authorities have not yet released the name of the suspect, Chris’ mother said they do not know him personally but he has burglarized their home before.

Chris said he hopes that whoever the man is, he learned his lesson about trying to steal stuff from their house.