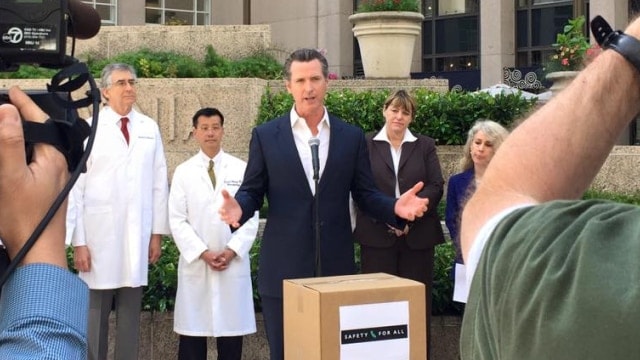 “It’s on!” said Lt. Gov. Gavin Newsom as he along with gun control advocates dropped off a reported 600,000 signatures for the Safety For All voter referendum campaign.

Newsom, who is currently running to replace Gov. Jerry Brown, would place a five-point list of gun control measures in front of voters in the coming general election. These include an end to grandfathering of magazines capable of holding more than 10 rounds, relinquishment of weapons by those prohibited by the state from legal possession and mandatory reporting of lost or stolen guns. In addition, it would require background checks prior to all ammunition sales – a first for any state.

Granted title for the measure by California Attorney General Kamala Harris last December, the campaign needs 365,880 verified signatures to make it to the ballot this fall. Newsom, who stood with San Francisco Sheriff Vicki Hennessy, Julie Leftwich from the Law Center to Prevent Gun Violence, and members of the medical community on Friday, contends they have delivered nearly twice that many.

“We’re there. This is going to be on the November ballot,” Newsom said this week as reported by the LA Times. “Over 600,000 registered voters want to take some bold action on gun safety.”

The expansive measure, far and above packages under review in the state Legislature would fundamentally change California’s gun laws, with a new and specific focus on ammunition.

“The next great effort on gun safety is going to be around ammunition,” Newsom told KQED. “We believe we should treat ammunition like we should guns. You have to use your license to get Sudafed but you have no obligations to get unlimited caches of ammunition.”

A dozen gun rights and law enforcement organizations in the state have banded together to form the Coalition for Civil Liberties and set up a dedicated website, stoptheammograb.com, in an effort to solidify opposition against Newsom’s voter referendum.

The group contends the Safety For All campaign may have benefited from potential illegal activity with signature gatherers, releasing videos of interactions in which they argue petition gatherers are misrepresenting what the initiative is about.

“Lieutenant Governor Newsom must take responsibility for his campaign workers’ deceptive practices,” said Chuck Michel, a co-chair of the Coalition for Civil Liberties, in a statement. “They should throw out every signature gathered under false pretenses. He should also allow a neutral third-party to conduct an investigation into the validity of the signatures they have gathered so far.”

The California Secretary of State’s office has until June 28 to qualify the measure for the ballot.