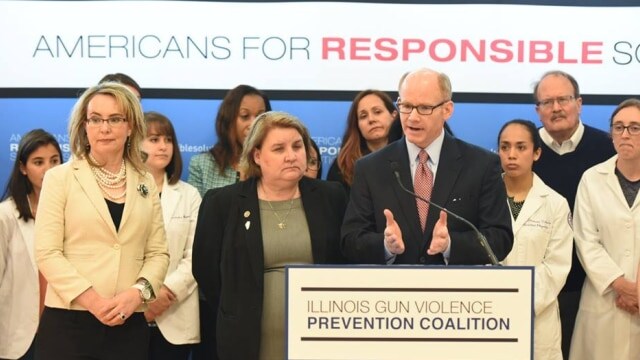 In conjunction with founding her sixth state franchise in as many months, the former lawmaker joined a new push last week to bring more regulation to gun stores in the Land of Lincoln.

The new group immediately joined an effort by an influential state Democrat to saddle licensed gun dealers in Illinois with additional mandates in an effort to curb violent crime.

“This effort is long overdue in Illinois,” said Illinois Senate President Pro Tempore Don Harmon, D-Oak Park, in a statement. “We’ve been working on these issues for years, and the key thing I’ve learned is this: somewhere in the stream of commerce between a gun manufacturer and a crime scene there is someone purporting to be a law-abiding gun owner, buyer or seller who is anything but.”

Harmon, who submitted a gun dealer licensing bill last year that has failed to gain traction, is backing a renewed proposal to be introduced this week to require background checks for gun dealer employees, special training to help employees spot straw purchases, and require inspections by state officials to identify missing firearms in dealers’ inventories.

The new coalition and gun dealer legislation has the support of a number of faith-based groups as well as the Illinois Council Against Handgun Violence, League of Women Voters of Illinois and the Illinois Chapter of the American Academy of Pediatrics.

“Gun trafficking and gun violence is a statewide problem that demands a statewide solution,” said Robin Lloyd, state legislative director of Americans for Responsible Solutions, Giffords’ national gun control PAC. “We hope that leaders from both sides of the aisle can come together to act make Illinois safer.”

Kelly, for his part, has been working to amp up the national conversation on guns, penning an opinion piece last week for Time in which he argued the case that America’s gun laws make the country vulnerable to terrorists.

Second Amendment advocates in the state blasted the actions of what they feel are outside influencers with an agenda.

“The fact that Kelly and spouse are here to muscle Illinois gun owners is an insult to every citizen of the state,” said Illinois State Rifle Association Executive Director Richard Pearson in a statement. “It’s time for Kelly and Giffords to pack up their wagon and head back to New Jersey or Arizona or Outer Space or wherever they’re claiming to be from these days.”

Pearson contends legal gun dealers in the state already have to go through extensive federal licensing requirements and new state-mandated requirements are nothing but harassment.

“The legislature has never deemed it necessary to issue state licenses to firearm retailers in the past, and there’s certainly no impetus to do so today,” said Pearson. “It’s clear that Kelly and his pals in the general assembly are determined to regulate, intimidate, and eventually eliminate lawful firearm retailers.”

Rep. Kathleen Willis, D-Northlake, is sponsoring the legislation in the House.