That sure is a funny looking 'Tommy Gun' you have there 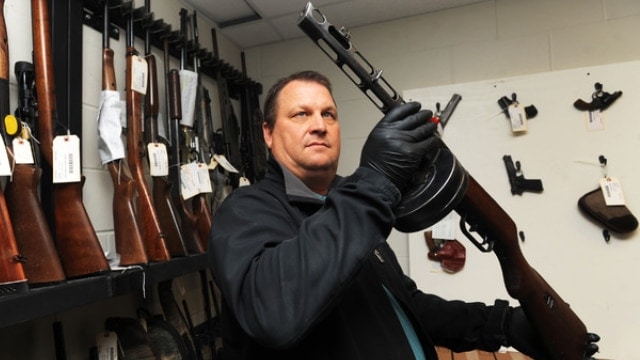 Police and reporters in one Iowa town apparently can’t tell the difference between an American-made Chicago Typewriter and a Soviet burp gun.

The Ames Tribune went down to the Story County Sheriff’s Office to do a piece on some of the more interesting items in the agency’s evidence locker that have piled up over the years. Of course, there were the normal flotsam and jetsam such as an Iowa driver’s license from 1933, but that was just garnish for the meat and potatoes: guns.

“Guns are different than most other evidence,” Ames Police Lead Evidence Tech Mark Wheeler told the media outlet. “Basically, with guns, unless they are forfeited, we generally try to hold onto them forever.”

The Sergent over the evidence locker was, “unsure of the gun’s backstory, but given the iconic status of the Tommy Gun, and its general association with gangsters and police during prohibition, he is in no hurry to send it to the DCI [Iowa Division of Criminal Investigation, for destruction].”

Well, there are a couple of problems with that as anyone who has flipped past the History Channel once or twice could probably outline. The gun shown in the image and described as a Thompson is actually an Eastern Bloc PPSh-41 submachine gun— or more likely a semi-auto clone.

These guns were first made in the Soviet Union during World War II, nearly a decade after the Volstead Act, the impetus behind Prohibition, was repealed.

Therefore, the story about the gun’s association with nefarious gangster types, while it no doubt makes good press, is far-fetched barring a time traveler who fell into a wormhole between the 1942 Stalingrad and 1928 Chicago.

Nevertheless, it is a nice looking gun, although it came out of the sock drawer of Comrade Zhukov rather than that of Al Capone.