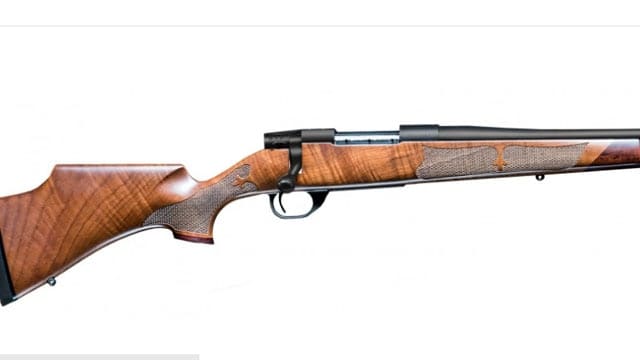 The Camilla was designed for women who hunt big game and varmints. (Photo: Weatherby)

This week, California-based Weatherby releases the Camilla, a rifle designed in consultation with female hunters and new focus of the company’s marketing directed at women.

The rifle is the most recent addition to the company’s trademarked Vanguard series, which isn’t gender-speccific. As such, it comes with a three-shot/sub-minute of angle guarantee when loaded with premium ammunition.  Its intended purpose is big game and varmint hunting.

Also common to all Vanguard rifles is a cold hammer-forged barrel, which in this case is 20 inches and blued with matte finish, and an action designed to release high-pressure gases, protecting the shooter in case of a case rupture.

Other than the short-ish inch barrel, features particular to the Camila are most notable in the stock. It’s made of satin-finish Turkish walnut, trimmed with rosewood caps at the grip and fore-end.  It’s checkered in a fleur de lis pattern. Other Vanguard stocks are synthetic.

The stock’s shape and dimensions are dramatically different and designed to fit a female frame.  The length of pull is a short 13 inches. Likewise, the foregrip is slimmer, shorter, and has a swell for palm fit.

Modifications are also present in grip configuration.  It’s slimmer than normal, with a more pronounced angle than other Weatherby rifle.  It has a slight finger groove. The comb is high to facilitate eye alignment for the typical female. The recoil pad has been redesigned. It’s smaller, with the toe canted forward.

Extra appeal has been added. The first 100 buyers to register their purchase with Weatherby will receive an optic for the new rifle, a Leupold VX-2 3-9x40mm scope.

The price is $849, and the Camilla can be ordered from the factory or purchased from dealers.

Camilla is the name of the wife of Weatherby Founder, Roy Weatherby. The name was voted top among choices available in an online contest run by the company.

In addition to being part of the Vanguard product line, Weatherby includes the gun in its women’s marketing campaign, “Women of Weatherby.” The stated mission of the campaign is to “empower and inspire the dreams of all women shooters and hunters.”

The flagship promotion of the Women of Weatherby campaign is a video called Sisterhood, featuring young adult hunters harvesting turkeys.