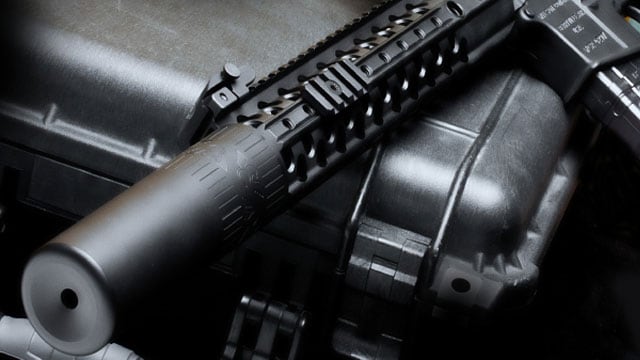 The new Whisper suppressor is made of titanium. (Photo: Wilson Combat)

Arkansas manufacturer Wilson Combat is celebrating the April release of its new centerfire suppressor, called the Whisper. The company invested about a decade in development of this family of devices. Their goal was to achieve portability and better decibel reduction than competitors’ suppressors.

They chose a titanium shell to achieve a light weight product. At 17.8 ounces, Whisper suppressors are about half the weight of other centerfire cans.

Research in performance and materials led the company to create a 1.875-inch main tube diameter that’s only six-and-five-eighths inches long, adding less than five inches to the normal length of a flash hider-equipped rifle. Its low profile won’t interfere with most sights and optics.

Wilson Combat says the virgin billet titanium used in the Whisper is quick to cool down, and resistant to heat and corrosion.

They made it durable on the inside as well, with fully welded construction that the company says prevents baffle displacement.

The monocore baffle design, claims Wilson Combat, increases accuracy while having no negative impacts on zeroing or barrel harmonics. They also claim cleaner function and the ability to sustain repeated firing for semi-autos.

Bead-blasted titanium gray is the standard finish. For $50, Armor Tuff coating in black, green, gray, flat dark earth, or desert tan can be added. There are two thread options as well.