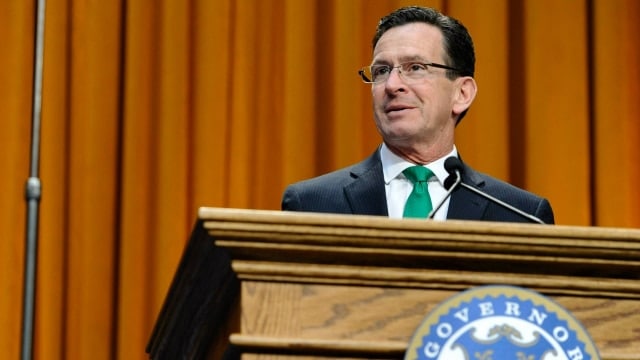 Connecticut Gov. Dannel P. Malloy will soon sign a bill into law that could see as many as 5,000 gun owners per year temporarily hand over their firearms. (Photo: AP/Jessica Hill, Pool)

The Connecticut Senate on Monday approved a House measure mandating those subject to protective orders turn over their firearms within 24 hours.

The bill, which would force gun owners to surrender their firearms within a day of a temporary restraining order in cases of domestic violence, was introduced by Democrats in February then carried the House in a 104-42 vote last week before this week’s 23-13 bipartisan Senate vote.

“To focus to a greater extent on the possible inconvenience of gun owners at the expense of the great danger to victims of domestic violence is not the balance that we should strike in looking at this issue of policy,” said Senate President Pro Tempore Martin M. Looney as reported by the CT Post. “That’s why this bill is exactly what we should be doing in this area.”

The legislation, HB 5054, makes a person ineligible to possess a firearm or ammunition if they are the subject of a civil restraining or protection order issued in a case involving physical force. Within 24 hours of the order being issued, the individual would have to surrender their guns to the local police department who could, in some cases, return them once the order expires.

The language of the proposal also forbids the Connecticut Department of Emergency Services and Public Protection from issuing a gun permit to a subject under such an order.

As noted by the Post, some 5,000 temporary orders are issued in Connecticut annually, of which about half go on to be permanent.

Gun control advocates, who have supported the bill at every stage of the legislative process, welcomed the news of this week’s approval by the Senate and urged the governor to quickly sign the measure.

“In the fight to reduce gun violence and save lives, Governor Malloy has been one of our country’s great champions for common sense, said former U.S. Rep. Gabrielle Giffords in a statement issued through her Americans for Responsible Solutions group. “I look forward to him signing this badly-needed legislation that will make Connecticut a safer place to live.”

Second Amendment groups in the state feel the proposal eliminates due process as affirmed under the 5th and 14th Amendments of the U.S. Constitution, ordering the seizure of guns with no opportunity for the gun owner to plead their case prior to their firearms being impounded. As such, the pending law could be rife for abuse.

“We feel it is important for the public to understand that individuals who may be served with an order of this type do not even have to be charged with any crime, let alone convicted of wrong-doing,” said Connecticut Citizens Defense League President Scott Wilson in a release. “It’s very unfortunate that proponents of this bill that hold office and have sworn to uphold our constitution are working hand in hand with groups that are specifically misleading the public. These groups are essentially claiming those who get served with one of these orders are factual domestic abusers based on one-sided claims.”

The measure will now be transmitted to Gov. Dannel P. Malloy, who affirmed in a statement this week that he will sign it.

“We have a moral obligation to work to prevent needless tragedy and to make this the law,” said Malloy.