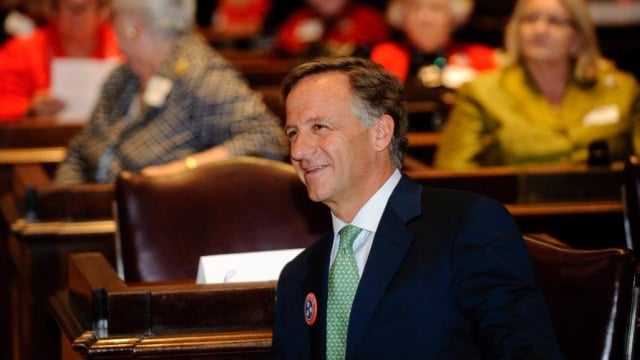 Gov. Bill Haslam returned the bill to the Senate unsigned, allowing it to become law by default. (Photo: Gov. Haslam/Facebook)

The Senate measure passed that chamber in a 28-5 vote while its House companion carried 69-24 last month, sending it to the desk of Republican Gov. Bill Haslam.

Despite appeals from both sides of the issue to either veto or sign the measure, Haslam took the rare step of returning the legislation Monday to the Senate without his signature after 10 days, at which point the bill was automatically law. He noted his preference would have been to let school administrators set their own policy to best suit their campus.

“I again expressed this concern throughout the legislative process this year,” said Haslam as reported by WATE. “Although SB 2376 does not go as far as I would like in retaining campus control, the final version of the bill included input from higher education and was shaped to accommodate some of their concerns.”

The bill, SB2376/HB 1736, is a limited campus carry measure that grants full-time employees of the state’s public colleges and university the ability under the law to carry a concealed handgun so long as they have a permit. Those choosing to do so would have to notify campus police beforehand.

There are some prohibitions still in place; for instance, an employee could not carry a firearm to a meeting in which job performance is the subject or to sporting events on campus.

“Governor Haslam has failed college communities across Tennessee by allowing guns on campus to become law without putting his name on the bill, despite the fact that his legitimate concerns about the bill, which were echoed by law enforcement, were not addressed,” said Jodi Polaha, an associate professor at East Tennessee State and a member of Moms Demand Action in a statement released by the group.

The bill’s sponsor, Rep. Andy Holt, R-Dresden, is promising to help bring more legislation in future sessions to do away with gun free zones for students as well.

“The purpose of running the bill is campus safety. It’s not an effort to create an armed battalion on campus but to allow individuals to protect and defend themselves,” Holt said.

The law goes into effect July 1.