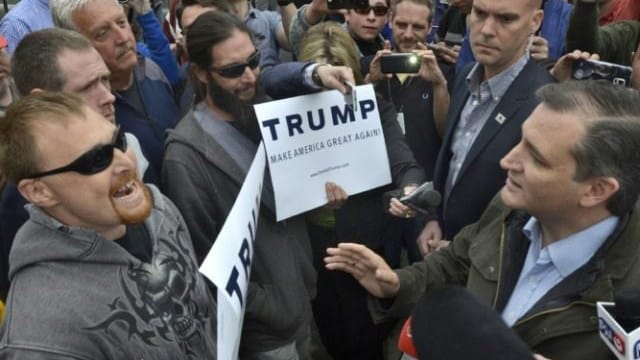 Ronald Reagan famously offered an eleventh commandment for Republicans, telling his party not to attack their own.  He didn’t exactly follow his own rules in the 1976 primaries running against President Gerald Ford, and as with many pieces of advice, they have to be stated vigorously and frequently thanks to how often such rules are ignored.  This harkens back to President Harry Truman’s comment given to his daughter in an episode of Person to Person: “I have found the best way to give advice to your children is to find out what they want and then advise them to do it.”

An illustration of intraparty squabbling came up in the campaigning for the Indiana primary this week, as reported in The New York Times. The vitriol tossed back and forth between Ted Cruz and Donald Trump doesn’t need review in great detail here, but Cruz’s exchange with Trump supporters raises some interesting points.

Cruz had been attending an event in a Marion, Indiana, restaurant and was heading out to leave when he saw a group of Trump supporters on the other side of the street.  Cruz crossed over and tried to carry on a conversation that consisted of Cruz making several claims about his record and that of Trump, while the latter’s supporters shouted “Lyin’ Ted” and finished Cruz’s statement, “A question that everyone here should ask” with “are you Canadian?”

Cruz deserves credit for his calm demeanor and willingness to talk with people who aren’t going to vote for him.  By contrast, the Trump supporter, who refused to give his name, made a comment after the incident that should give us all pause.  He told The Times reporter, Matt Flegenheimer, that “Anything that Donald Trump talks about, that’s what I’m about.”  This is a statement I’d expect to hear from cult followers, not from informed voters, but I’ve pointed out the disturbing historical parallels in the Trump campaign.

More video of the exchange is given by Fox News Insider, including a question about gun rights.  The Trump supporter asks Cruz what he’s going to do about the Second Amendment.  Cruz’s response was to say that he has “defended the Second Amendment in front of the Supreme Court of the United States.”

On that point, I’ll allow Cruz a rhetorical flourish, since as solicitor general for the State of Texas, he did in fact write the amicus brief on behalf of 31 states for the Heller case in 2008. And his statements about many aspects of gun rights over the years would fit in well with most of the commenters on this site. By contrast, Trump has a more equivocal record, having expressed support for purchase waiting periods and an assault weapons ban in the past.

Perhaps Trump has had a “come to Browning” moment on the subject of guns, and Republicans are more and more regarding him as their choice for their party’s face at the top of the ticket.  Democrats are also making a curious choice in Hillary Clinton.  With both front runners, we have candidates who have taken a wide variety of positions on the key planks of their respective parties’ platforms. Cruz and Bernie Sanders would have offered a solid record of supporting the definitive views of the Republican Party and the Democratic Party, but that isn’t the selection being made this time around.

On guns and on any other issue, celebrity, name recognition, and a pleasing current message are things that are better ignored, giving us time to focus on voting records and the specifics of policy proposals.  But the bandwagon rolls on, no matter how much we editorial writers have to say about it, and this year will be an interesting one.