How a Winchester linked to Geronimo sold for $1.1 million 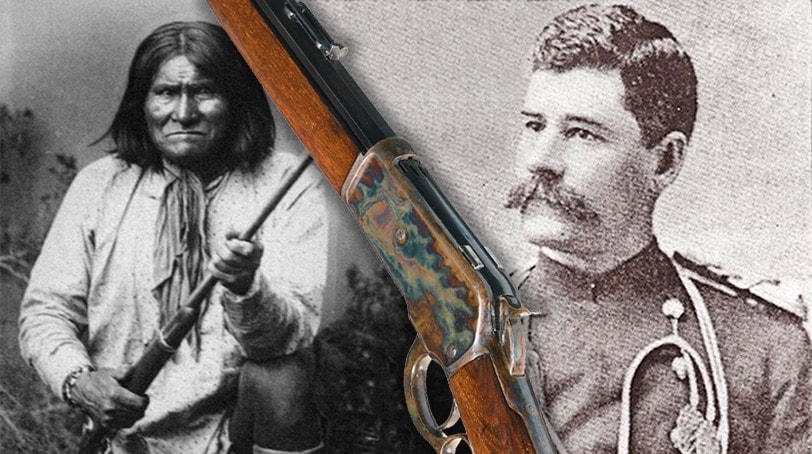 It was almost a regular Saturday on the Illinois side of Quad Cities near the Mississippi River, where the Rock Island Auction Company sold a rifle now valued at $1.1 million, setting a new record for a single firearm sale.

The antique Winchester 1886 bore a personalized inscription for Henry W. Lawton, a Medal of Honor recipient presented the rifle for capturing Geronimo.

Lawton, then a captain in the Army, led the 1886 expedition that captured the Apache warrior. According to a report of the pursuit, Lawton with his cavalry of soldiers tracked Geronimo south of the U.S.-Mexico boundary. They eventually wore down the native warrior and his band of followers since the group had little time to stop or rest. Geronimo was the last Indian warrior to surrender, signaling an end to the Indian Wars.

The rifle was the first off of a production line and presented to Lawton by fellow Army officer George E. Albee, who served alongside him while pursuing Geronimo. An inscription reads, “Albee to Lawton.”

“No question the rarest Winchester firearm that we’ve ever offered in my opinion — in our opinion. It’s the most significant Winchester rifle ever offered before,” said Kevin Hogan, president of the auction company and an auctioneer. “Serial number one of an iconic production model, Winchester 1886, with just unbelievable American history, so we’re excited to have it. We’ve had a lot of fun with it. But without further adieu let’s get this thing sold.”

In the first minute, multiple buyers hit slapshots and drove up the price to $850,000, more than double the initial asking, and that’s when bids slowed to a walking pace.

Hogan stepped down from the podium to address the remaining two buyers, represented by men sitting at the phone bank. Both had a phone receiver wedged between his shoulder and chin and then a free hand in the air holding a green placard that identified the bidder by a number. The audience watched knowing any bid could be the last.

“Mr. (Chris) Cox, anytime you wanna jump in,” he said to the National Rifle Association executive who, like the rest of the audience, watched the shootout play out in real-time. Then in a moment taken by laughter, bidders remained focused and the price jumped to $900,000.

“Kev, do you take credit card?” an audience member asked. In response, Hogan stepped out of the moment. “We, we do take credit cards,” he said, like a well-timed punchline, and then returned. “One million is on the phone. It must be one-point-one. What does he think of one-point-one? Would he do one-point-five?”

“I have one million. Will he do one five? A million-fifty-thousand? I’m sorry,” Hogan said.

The man on the phone relayed the price: “One-million-fifty-thousand?”

The man on the phone repeated: “One-point-one-five?”

As the man on the phone repeated the price, he relayed the buyer’s responses, then asked, “Are you sure?

“In or out? I gotta give it a last call. Selling once at one-point-one-million,” Hogan said.

“No. You’re saying no?” the man asked the buyer.

“He’s giving you one more chance,” the man told the buyer.

“Sold it at one-point-one-million! I believe that’s a new world record. Thank you. Thank you.”