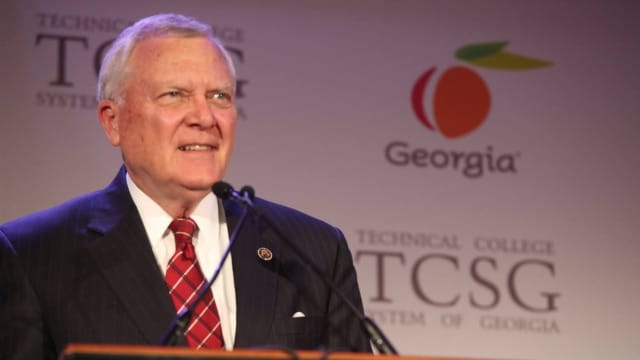 Deal, who signed the state’s expansive right to carry legislation in 2014, held this week that guns shouldn’t be allowed on the state’s college campuses. (Photo: Gov. Deal/Facebook)

The legislation, which passed the House in a GOP-heavy 113-59 vote on Feb. 22 and won the Senate 37-17 in March, aimed to drop gun-free zones on campuses except in buildings or property used for sporting events and student housing.

Then came the 40-day period allowed for the Governor’s signature.

Though Deal in March dismissed claims that allowing guns on campus would lead to increased violence, remarking similar arguments were made when he signed the state’s so-called “Guns Everywhere” bill into law in 2014, which rang hollow, he had a change of heart on the legislation this week.

Deal signed more than 120 bills into law throughout the morning and afternoon Tuesday, then at end of the day issued 16 vetoes, including one on the campus carry legislation.

“From the early days of our nation and state, colleges have been treated as sanctuaries of learning where firearms have not been allowed,” said Deal at the end of his 1,200-word veto memo to lawmakers. “To depart from such time honored protections should require overwhelming justification. I do not find that such justification exists.”

The legislation, HB 859, would have codified the ability of those with a Georgia weapons license to carry a concealed handgun in or on most buildings or property owned or leased by a public post-secondary school in the state. Exceptions would have remained in place for sporting arenas and stadiums during ticketed events and for student housing such as on-campus dorms, sororities and fraternities.

While the bill was opposed by newspaper editorial boards, faculty groups and state Democrats, it was national gun control organizations that kept the heat on Deal to issue a veto once the bill reached his desk. An online campaign by former New York Mayor Michael Bloomberg’s Everytown group led to more than 30,000 petition signatures delivered to the Governor by the PAC in March.

“This veto is thanks to thousands of Georgians who have spoken out and rallied against guns on campus,” said Lindsey Donovan, head of the Georgia chapter of Moms Demand Action, in an email to Guns.com. “The leadership shown by Governor Deal with this veto should stand as proof to other elected officials that this is not a partisan issue and that they too can stand up to the gun lobby.”

The group contends that by vetoing HB 859, Governor Deal has saved Georgia colleges and universities from unnecessary risks and costs.

A state gun rights organization takes exception to that logic.

“There was absolutely no cost added to the state or universities,” Jerry Henry, executive director of GeorgiaCarry.org, told Guns.com. “As for there being no unnecessary risks, tell that to the four people who were robbed at gunpoint in the library and the two students that were shot on the Georgia State University Campus just this year. Add to that the two students that were victims of armed robbery on the Georgia Tech campus last night and then tell me again how the governor saved them from risks.”

The National Rifle Association was disappointed in Deal’s apparent flip-flop on the issue.

“We agreed with Governor Deal when he said that the arguments against the campus safety bill lacked validity. He was right then, but he is wrong today,” NRA spokeswoman Catherine Mortensen told Guns.com. “It is unfortunate that Governor Deal vetoed a bill that would have made Georgia campuses safer for his constituents.”

While falling short of calling for a veto override, members of Deal’s own party to include Lt. Gov. Casey Cagle and House Speaker David Ralston issued statements blasting the Governor’s move.

“At a time when our Second Amendment rights are under attack, I believed and still believe that it is very important that we do all that is necessary and proper to strengthen our constitutional protections,” said Ralston. “Georgians should not be required to give up their constitutional rights when they set foot on a college campus.”