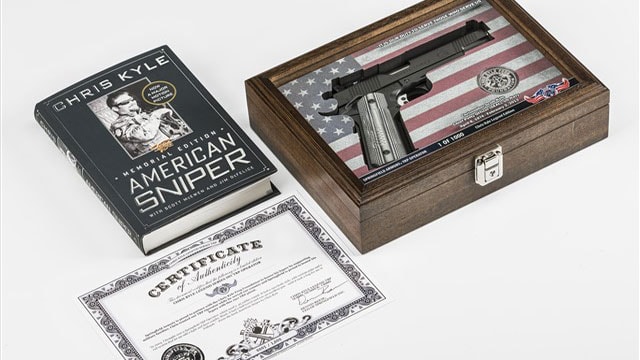 The memorial 1911 comes with a serialized case and more. (Photo: Gun Broker)

Illinois gun maker Springfield Armory will offer limited edition 1911 TRP model pistols in honor of the late Navy SEAL sniper Chris Kyle and number one in the series will be up for auction later this month.

The .45 ACP pistol was inspired by this quote from Kyle’s autobiography American Sniper: “In 2004, I brought over a Springfield TRP Operator, which used a .45 caliber round. It had a 1911 body style, with custom grips and a rail system that let me add a light and laser combo. Black, it had a bull barrel and was an excellent gun – until it took a frag for me in Fallujah. I was actually able to get it repaired – those Springfields are tough.”

In a wide partnership that includes the Chris Kyle Frog Foundation — with Kyle’s wife  Taya at the helm — Springfield Armory, the retailer Gun Broker, and the upcoming National Rifle Association convention, the number one pistol in the series is currently up for auction on gunbroker.

The pistol’s in-person transfer from original owner Taya Kyle to the buyer will be made at the Springfield Armory booth at , located the NRA show in Louisville. Bidding has already begun online, but a dramatic, live-bidding finale is planned.

Taya Kyle was presented with the pistol by Springfield Armory at the 2016 SHOT Show. Her immediate response included plans for a benefit auction.

Springfield’s president and chief executive officer, Dennis Reese, will also be on hand for the announcement of the winning bid, and will present a check to Kyle, representing the Chris Kyle Frog Foundation, in the amount of the final bid.

“We felt it appropriate to make this special edition pistol to honor [Chris Kyle’s] memory and support the ongoing work of the foundation,” Reese said. “Very much like American hero Chris Kyle, this pistol is truly one of a kind.”

Springfield will produce one thousand TRP Legend Series pistols, each with a unique serial number ranging from CK0001 through CK1000. The first gun in the series was presented to Taya Kyle, who donated it to benefit the foundation named for her husband.

In addition to the donation of proceeds from the first in the series, Springfield has volunteered to donate a portion of the profit from the sales of the other firearms in the limited edition to the Chris Kyle Frog Foundation, which offers support to military and first-responders.

Pistols in the series will be packaged in a serialized mahogany presentation case. A memorial copy of the best-selling book, American Sniper, signed by Taya Kyle, will be included, as will a .999 pure silver Chris Kyle limited edition challenge coin, and a Springfield certificate of authenticity.

As of this writing, the auction pistol’s bid is $15,101. MSRP for the pistol and package is $2,499. Other guns in the series will be shipped to dealers around the US following the auction.