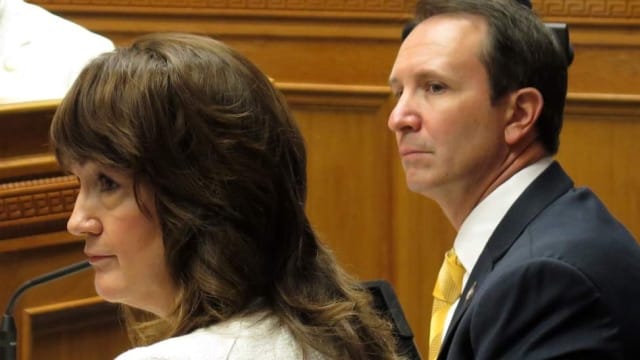 Rep. Valarie Hodges, R-Denham Springs, seen with Louisiana Attorney General Jeff Landry, is advocating a measure that could shortcut carrying a legal gun in the state for those who have obtained restraining orders. (Photo: Mark Ballard/The Advocate)

A House committee unanimously approved a measure this week to allow those with a protective order against an abuser to temporarily carry a concealed handgun without a permit.

The legislation, introduced by a Baton Rouge area Republican, cleared the House Committee on Administration of Criminal Justice with ease Tuesday.

“Our nation has more women who are murdered by a former spouse or boyfriend – and it’s more than the number of people who lost their lives in the attack on the World Trade Center and more than the battles in Iraq,” said bill sponsor, Rep. Valarie Hodges. “We’re talking about sisters, daughters and mothers murdered at the hand of a loved one.”

Hodges’ measure, HB 176, as proposed would authorize an adult 21 years of age or older who has a protective order issued on grounds of abuse and is not prohibited from possessing a gun to carry one concealed in the state for 90 days or the life of the order, whichever is greater. However, those who do so would be required to carry the order with them under threat of a $500 fine.

An amendment substitute would allow for application of a temporary concealed carry permit through the Louisiana State Police that waives the current training requirement in the interest of expediency. The permit would be valid for 45 days and cost $25. Once training is received, the individual can apply for a regular permit and the fee would be used as a credit towards that goal. Currently, a five-year permit costs $125 and a lifetime permit $500.

“I’m certainly in favor of making sure we do everything in relation to domestic abuse and I don’t want to see any man, woman or child abused in any way, but I’m concerned we’re allowing a person to get a weapon prior to any training, and only requiring it after they get the gun or permit,” said Norton. “Besides, why is this just a gun?

“I’m concerned about other weapons, such as a hammer, a knife, a tire-iron or anything else you can use to protect yourselves,” Norton said.

The proposal is supported by the National Rifle Association among various other gun rights groups and could be heard by the full House as early as next week.