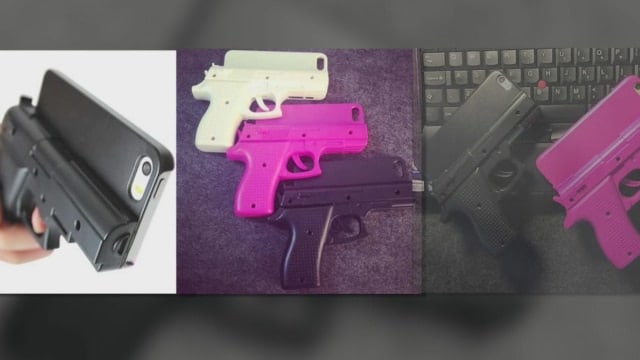 The measure, should it become law, would mean a $300 fine for anyone found with the cell phone case that kinda looks like a gun. (Photo: minnesota.cbslocal.com)

In a unanimous vote on Wednesday, the state Senate approved a bill to criminalize the possession of a phone case that resembles a firearm.

Introduced in March, the bill prohibiting the possession, manufacture, or sale of such cases in the state passed in a 60-0 vote this week,

“Someday some kid is gonna hold up their cell phone case…. and a nearby police officer or a nearby person who has a permit to carry, or someone who doesn’t have permission to have a firearm, is gonna react… and someone’s going to die,” said Saint Louis Park Democrat Ron Latz, who has championed increased regulation of real guns this session without much luck.

Latz’s bill, SF 2416, would add to Minnesota law that no person shall purchase, possess, import, manufacture, sell, or distribute a phone case or cover that appears to be a firearm, though it does not specify a test to meet the criteria. Violators could incur a $300 fine for each offense.

Such phone covers became hotly debated last summer and led cities in New Jersey and Illinois among others to ban the controversial accessories.

At least one Minnesota lawmaker pumped the brakes on the legislation this week, though in the end he did not vote against it.

“Where do we stop?” asked Sen. Torrey Westrom, R-Elbow Lake. “Making something similar to something … it seems to be a kind of a slippery slope.”

State gun rights advocates emailed by Guns.com for comment did not reply before publication.

The legislation now heads to the Minnesota House.