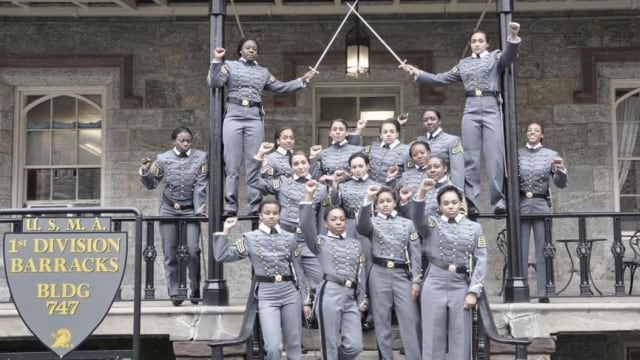 This snapshot of cadets, including on West Point grounds, is causing an uproar.

A photo of 16 black female cadets at the U.S.Military Academy giving a raised fist salute has sparked outrage and an investigation.

The image first popped up on the popular blog of veteran and motivational speaker John Burk earlier this week who cited long-standing Department of Defense directives against attending political events in uniform and the display of political statements at one’s residence on a military base.

In 2012, an Army Reservist who spoke in uniform at a Ron Paul rally was disciplined by the military. Last December a Marine Reservist who sang the national anthem at a Donald Trump event while in his dress blues was similarly rebuked.

Then on Thursday, Army Times posted an article with feedback from West Point officials on the controversial photo, though it fell short of definitively tying the image to the Black Lives Matter movement.

“We can confirm that the cadets in this photo are members of the U.S. Military Academy’s Class of 2016,” West Point’s Lt. Col. Christopher Kasker told Army Times. “Academy officials are conducting an inquiry into the matter.”

A link to the Army Times story at Rally Point, a forum for current and former service members, has more than 22,000 views and nearly 100 comments.

Nininger Hall, the historic building where the image was taken, is, ironically, home to the Simon Center for Professional Military Ethics and houses the Cadet Honor Committee.