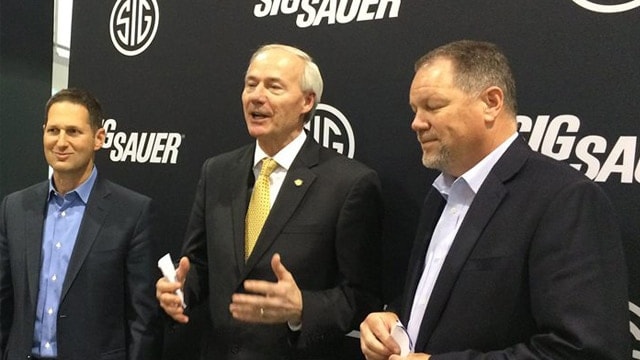 Sig Sauer finalized plans Wednesday to relocate its ammunition operations to Jacksonville, Arkansas, completing a project that had been developed alongside state and local leaders.

“The new location in Jacksonville gives us the room we need to expand as we continue to grow and is also beneficial from a shipping and logistical standpoint,” said Dan Powers, president of the Sig’s ammunition division, in a statement. In addition to commenting on the physical space, he commented on the location and economic incentives.

Sig’s Elite Performance Ammunition manufacturing operation will be moved from Eubank, Kentucky, to an existing, and soon-to-be renovated, building in Jacksonville. The company anticipates employing 50 people in the initial relocation phase, with additional jobs planned for the future.

Arkansas Gov. Asa Hutchinson announced the project, as well as a Remington development project, in January while making an appearance at an annual trade show in Las Vegas.

“The fact that a world-class company like Sig Sauer is choosing to do business in the state adds to our momentum in manufacturing, and we appreciate this significant commitment they are making to locate in Arkansas,” said the governor, who started his term in 2015.

Sig said it anticipates being up and running in Jacksonville by the end of 2016. Sig, traditionally known as an international firearm manufacturer, launched the ammo brand in 2014.