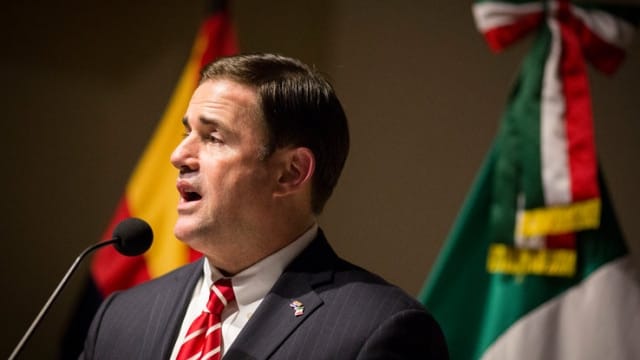 Gov. Doug Ducey will have to decide this week on a law to establish an interstate firearm agreement with a mandate to lock in current gun transfer laws. (Photo: Caitlin O’Hara/The New York Times)

A bill to establish an interstate compact restricting member states from adopting gun transfer requirements tougher than existing federal law is headed to the governor.

The measure to create the Uniform Firearms Transfer Compact to help block future laws with relation to the transfer of guns – such as mandates for background checks on private gun sales – passed the House 35-24 in March and the Senate 18-11 last week. The Compact would trump events such as a voter referendum in member states to enact universal background checks.

Backers see it as an ace in the hole against former New York Mayor Michael Bloomberg’s Everytown group supporting ballot-driven background check expansions in a number of states – including neighboring Nevada.

“It’s problematic, it’s troublesome, that a person with lots of cash in their pockets could come into Arizona, put a referendum on the ballot and have the money to really market that referendum to the point where it might be passed, where folks who are not paying a great deal of attention might help pass it,” said bill sponsor, Rep. Bob Thorpe, R-Flagstaff.

Thorpe’s measure, HB 2524, would enact the compact and prohibit any member states from creating or imposing any fees, taxes, penalties, mandates or regulations, or any civil or criminal liabilities, additional to already existing federal laws with relation to the transfer of firearms.

Member states would be locked in for 10 years but could withdraw upon unanimous consent of all states in the compact.

Notably, some of the most vocal opposition to the measure has come from Bloomberg-backed groups.

Last year the House passed a similar measure that was derailed through the work of the Dorn Policy Group, paid for by Everytown, who successfully lobbied Senate leadership to stall the legislation until time ran out in the session.

The same groups are urging Gov. Doug Ducey, a Republican, to veto the more successful rebooted proposal this time around.

“The legislature has failed to do exactly what they are hired to do: put the safety of our communities first and stand up for their constituents,” said Geneva Haber, with Mom’s Demand Action in Arizona, in a statement. “Instead, the Arizona legislature bowed to the gun lobby and passed a bill that would undermine the rights of their own constituents – and even themselves. House Bill 2524 would force Arizona to be at the will of other states and tie the hands of elected officials when it comes to passing any laws related to the sale or transfer of guns.”

The bill was backed by a myriad of gun rights groups including the National Rifle Association and Arizona Citizens Defense League.

The Arizona proposal is perplexing to some Second Amendment scholars.

“If passed, this legislation could effectively tie lawmakers’ and voters’ hands on gun control. Indeed, that appears to be its sole purpose,” Adam Winkler, a professor of constitutional law at UCLA, explained to Guns.com previously. “There is no serious political push for expanded background checks in Arizona today, so this law is geared toward preventing such law from being enacted by future legislatures or ballot measures.”

Ducey, who has not weighed in on the proposal before him, has 10 days to sign the bill into law, veto it or do nothing and allow it to become law without his signature. The Legislature can override the governor’s veto with a 2/3 vote, which could prove problematic considering the narrow House margin of approval earlier this year.