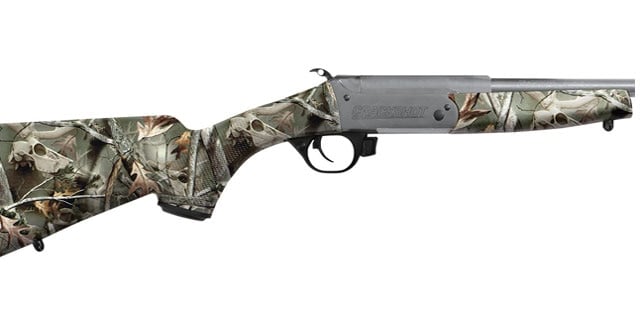 Crackshot rimfires have a plethora of options. This one has reaper buck/cerakote finish. (Photo: Traditions Firearms)

Traditions Firearms of Connecticut announced the May release of an entirely new line of rimfire rifles, the Crackshot.

These compact shooters are suited for beginner, plinking, varmint, backpacking, or truck gun use.

All Crackshot rifles are break-open action with single shot capacity. All are takedown style. To take the rifle down, the sling stud doubles as a tool to remove forend and barrel. Each model weighs a bit more than four pounds, sans the optional scope.

It appears iron sights are not included, however there is a one-piece platform for optic/rail mounting. Each rifle has a manual trigger block safety.

Options abound with this new lineup. Caliber choices are 22 LR or 17 HMR. Most barrels are 16.5 inches. In addition, according to a company press release if not the Traditions website, a 20-inch barrel is an option for the black/blued finish guns in both calibers.

Also among the options is a 4×32 scope of unspecified brand, mounted on a Picatinny rail. Traditions says scopes are mounted and bore sighted by a factory trained technician.

Speaking of finishes, Traditions made one for just about everyone’s taste. The synthetic stock/barrel can be found in traditional black/blued, muddy girl camo/blued, or reaper buck camo with subtle gray cerakote steel.

MSRP ranges from $219 to $354, depending on package. That includes scoped rifles.