PBS looks at guns in America with two-night event (VIDEO) 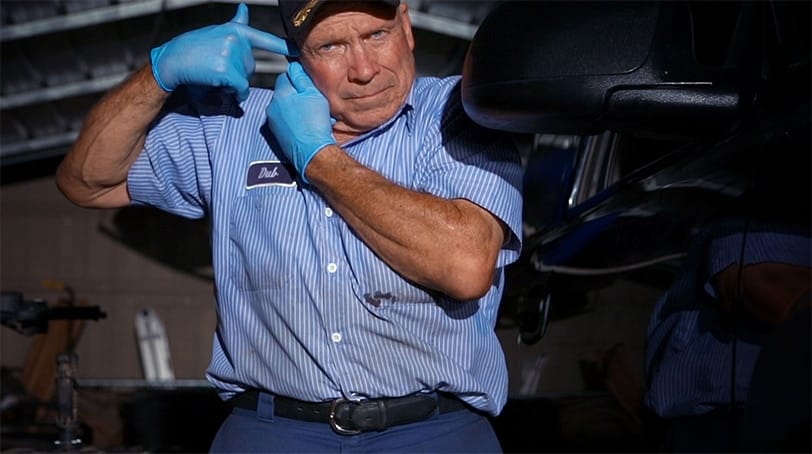 Former police veteran William J. “Dub” Lawrence never expected the SWAT team he started in the 1970s in Utah would kill one of his family members. Now he’s vowed to change the tactics of a militarized American police. (Photo: PBS)

The PBS series Independent Lens is airing a two-night event Monday and Tuesday dedicated to guns in America. The first, “Peace Officer,” was a grand jury winner at the SXSW film festival last year and is about the increase in police SWAT teams and the force they execute nationwide, using the death of a Utah man at the hands of special tactics officers to shine a light on the issue.

The man’s father-in-law, William J. “Dub” Lawrence, helped found the state’s SWAT program in 1975 and has been working to reform it since his son-in-law’s death – the result of a 12-hour standoff with police on Sept. 22, 2008 – while helping bring attention to the militarization of America’s police agencies.

“I was a witness to a homicide,” Lawrence says in the film’s trailer. “I went over and over it in my head because it didn’t make sense in my head the way it went down.”

Seventy-year-old Lawrence, since retired and now running his own sewage cleaning business, uses his off-time to investigate the death of his daughter’s late husband, Brian Wood, who officers killed after responding to a domestic disturbance call that escalated to that final and fatal result. Wood was no innocent victim, but Lawrence thinks the officers went too far. Armed, Wood had barricaded himself in his pickup truck. Police fired into the truck – gas, rubber bullets, stun guns, flash grenades and pepper spray left him unarmed, incapacitated and vulnerable on the driveway. A sniper’s single bullet ended the standoff.

Night two of the PBS event takes a look at an evangelical minister who struggles with the conflict between pro-life and pro-gun and how it’s impossible to be both. “The Armor of Light” follows Rev. Dr. Rob Schenck and Lucy McBath, whose teenage son, Jordan Davis, was fatally shot at a Jacksonville gas station in 2012. The incident was the focus of another film, “3 1/2 Minutes, Ten Bullets,” which again brought to attention to stand-your-ground laws.

Each of the films will be followed by taped townhall discussions on guns Monday and Tuesday nights.