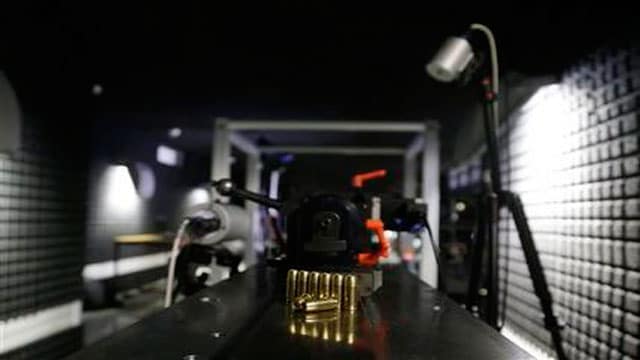 The underground lab of the University of Defense in Brno, Czech Republic, with their re-engineered 9mm for air marshal use. (Photo: Associated Press)

This week, the University of Defense in Brno, Czech Republic announced it’s ready to move its specialized air marshal 9mm ammo out of the lab and into use, according to a news report by the Associated Press.

The university has spent the past five years developing an improved hollow point that will not over-penetrate human targets nor cause catastrophic damage to airplane hulls.

The research was commissioned and funded by the Czech Interior Ministry, which oversees the country’s air marshal program.  Like several others of its kind, the program was established in the post-9/11 era as a security measure.

University representatives said they’ve not invented anything new, but have re-engineered hollow points to meet the requirements set upon them by the grant.  They claim their new round will expend all of its energy on the initial target.

This research was done in an underground lab, and the focus was on the mechanical expansion of the round that makes it unlikely to exit the primary target.

Said Lt. Col. Ludek Jedlicka of the Department of Weapons and Ammunition at the Faculty of Military Technology, “by developing this 9mm ammunition, we’ve reached its technical and ballistic limits.”

Brass bullets of approximately 62 grain weight were used. Ammunition resulting from the research travels at a speed unprecedented for the caliber in today’s market: 1,640 feet per second.

Penetration depth and wound channel information were not disclosed.  No in-depth information about the research methodology is available publicly at this time.

Other European air marshal programs have expressed interest in testing the new round for themselves.  The Czech air marshal forces are reportedly eager to move forward with its adoption.