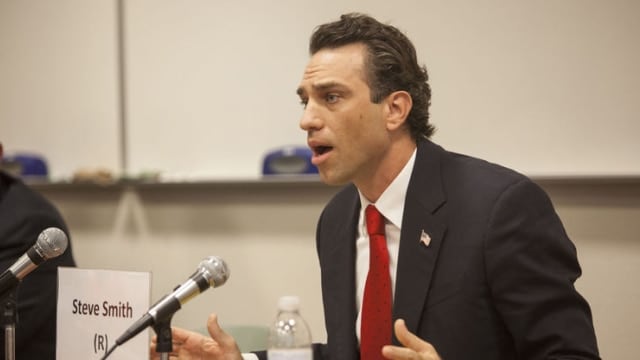 The Arizona legislature have sent Gov. Doug Ducey a measure to add some serious teeth to the state’s preemption laws and allow third parties to sue local governments for up to $100,000.

The Senate Bill, which will allow a $50,000 penalty against cities and counties with local gun codes stronger than the state’s, passed that body 18-11 in February and the House 31-23 last week.

“The law is very clear what cities and municipalities and towns and counties can and cannot do when it comes to regulating firearms,” said bill sponsor, Sen. Steve Smith, R-Maricopa, in committee hearings. “Like it, don’t like it, don’t care, the law is the law. You cannot impose a more stringent measure than what the state statute or constitution allows. That’s all we’re saying. And if you are going to do that, you are going to face a penalty.”

Smith’s bill, SB 1266, will set aside any local rule, ordinance, tax or regulation found in excess of Arizona’s firearms preemption statute. Further, it establishes penalties for violations to include a civil fine of up to $50,000 and removing public officials behind the regulation from office while allowing “a person or organization whose membership is adversely affected by an ordinance” to take the city or county to court seeking to repeal the measure and obtain up to $100,000 in damages as well as court costs and fees.

As such, it allows groups such as the National Rifle Association to stand in for local citizens, much like a law signed in Pennsylvania two years ago which is now facing legal challenges of its own.

While Arizona already has preemption laws on the books that prohibit overreaching local gun control ordinances, there are no established penalties for counties and cities that chose to enact such restrictions.

This has led some cities to thumb their nose at state law, notably Tucson. In 2013, the city adopted two measures, one imposing a $100 fine on those who failed to report lost or stolen guns to the police within 48 hours and another mandating those discovered discharging weapons face a breathalyzer. Arizona Attorney Gen. Thomas Horne soon found both to be in violation of state law, though the city refused to strike them.

Although legislative debate was slim on the bill, gun control advocates feel the measure is tailored to special interest groups and will remove local officials who are working to create firearm regulations essential to public safety. This has sparked a call for Ducey to veto the measure.

“Arizonans have seen our fair share of tragedy and we need to work together to make a safer Arizona,” said Pam Simon, a survivor of a 2011 mass shooting and member of Everytown, in a statement issued this week. “Instead of passing common-sense gun laws that will help save lives, our legislature took the exact opposite approach and passed legislation that would put the safety of Arizonans at risk.”

The bill has the support of Second Amendment groups to include the NRA, which lobbied for its passage during the legislative process.

Ducey, required by law to act within 10 days, is expected to sign or veto the proposal this week.