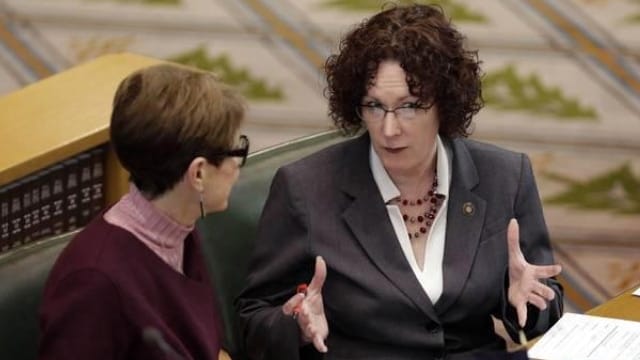 Val Hoyle helped keep a Bloomberg-backed gun control bill off the rocks while in the House last year, and picked up a large donation this week due to her efforts. (Photo: Elect Val Hoyle)

Former Oregon House Majority Leader Val Hoyle, who stepped down in the face of a recall election, received a huge influx of funds in her coffers for a run for Secretary of State.

In 2015, Van Hoyle was one of the engines behind pushing a bill to expand background checks to private sales through the legislature along narrow and bitterly defended party lines. This led to a grass roots effort by local voters to recall Van Hoyle and two other lawmakers tied to the new law. However, the Eugene-area Democrat sidestepped the move as she stepped down to campaign for Oregon’s secretary of state, a spot left open when Kate Brown assumed the governorship last year.

Now, facing a tough field of competitors in a make or break May 17 primary race, Hoyle received a $250,000 shot in the arm from billionaire gun control advocate Michael Bloomberg over the weekend but is incurring the wrath of those in her own party she is running against.

“At a time when Rep. Hoyle is claiming she will get big money out of Oregon politics, her accepting the largest contribution in the history of a secretary of state’s race from a New York billionaire is shocking,” Sen. Richard Devlin, D-Tualatin, said in a statement Monday. “Even more disturbing is that this $250,000 check is an admitted direct payback for a single piece of legislation.”

As reported by the Portland Tribune, Hoyle has amassed the largest war chest in the ordinarily pedestrian race, with at least $855,000 collected since 2015. Devlin, by comparison, has only produced $294,000 while a third Democratic contender, current labor Commissioner Brad Avakian, has $626,000.

In contrast, the largest single donor to Devlin’s campaign is the Oregon Healthcare Association, which has given him $36,000. Avakian similarly received $40,000 from the United Food and Commercial Workers union.

“The hypocrisy of Val Hoyle is astounding,” said Brad Pyle, Avakian’s campaign manager, “While preaching her commitment to reduce the influence of money in politics she was accepting a quarter-million dollar check from a Wall Street billionaire, silencing the voices of everyday Oregonians.”

Howard Wolfson, a representative for Bloomberg, openly ties the comparatively massive donation to the background check proposal Hoyle helped navigate through the legislature.

“Mike is supporting Val Hoyle because her leadership in passing Oregon’s background check bill is truly notable,” Wolfson told the Register Guard. “No one in the country has worked harder — or more successfully — to take on the NRA than she has.”

The donation matches $250,000 given by Bloomberg-backed Everytown for Gun Safety organization to Gov. John Kitzhaber for his 2014 gubernatorial reelection. Kitzhaber resigned the next year amid an influence-peddling scandal and criminal investigation just over a month into his fourth term.