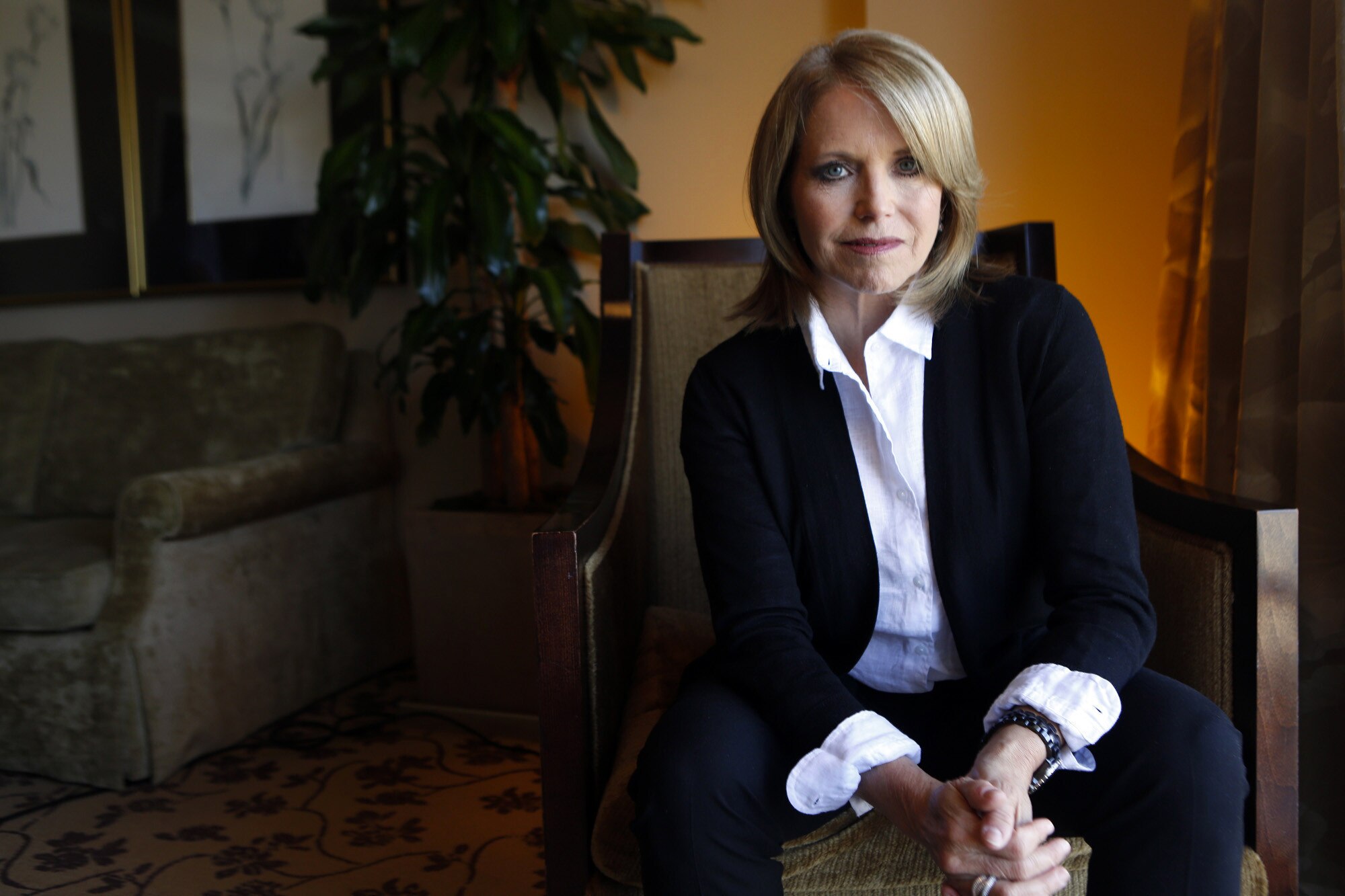 Journalist Katie Couric says documentaries are the new journalism. Her new film on gun violence in America will be released May 15, just days before the NRA convention in Louisville, Kentucky. (Photo: The Los Angeles Times)

In shooting guns and in politics, the bigger the target, the easier it is to hit. The National Rifle Association is no exception and a new documentary puts the gun rights group in its sights.

“Under the Gun” takes a deep dive into gun violence in America and paints the NRA as the villain behind a mastermind plot to foil common-sense measures meant to reduce the death toll wrought by gun violence.

“We show there is the impact of the gun lobby at every turn, whether it comes to the computerization of records and the ability of the Bureau of Alcohol, Tobacco, Firearms and Explosives to trace weapons or whether it comes to studying gun violence as a public health issue,” said journalist Katie Couric in an interview with the Los Angeles Times. “It’s almost like a puzzle how all this fits together in a lack of serious action on the part of legislators and the public.”

Couric goes on to say that the film is not about attacking the Second Amendment, but stemming the tide of gun violence. But the documentary reads like a laundry list against the lobby group the film argues mainly represents firearms manufacturer interests.

It’s the NRA’s influence of politicians and entire legislative bodies that protects that interest which exceeds the will of its members, the documentary argues. The film’s website goes further by attempting to put a wedge between that constitutional right and the NRA by appealing to gun owners. It calls on them to cast the gun lobby group aside, according to a message “for gun owners.” 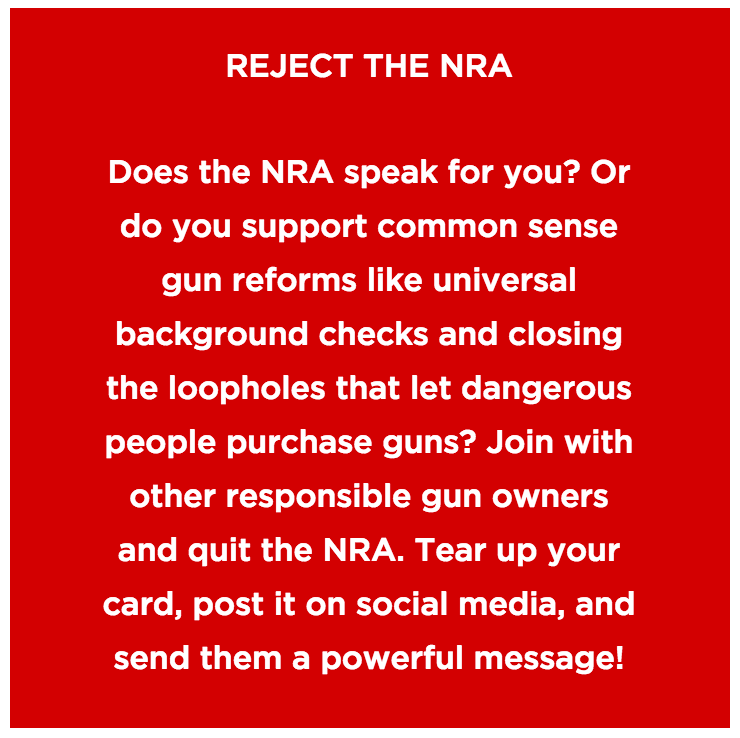 A message on the “Under the Gun” website calls on gun owners to reject the NRA.

“Does the NRA speak for you? Or do you support common sense gun reforms like universal background checks and closing the loopholes that let dangerous people purchase guns? Join with other responsible gun owners and quit the NRA. Tear up your card, post it on social media, and send them a powerful message!”

According to the film, the NRA does not speak for the majority of gun owners or even its members, which only consist of 6 to 7 percent of the nation’s gun owners.

The film also argues that most gun owners don’t join the NRA because they agree with its leadership’s political stance — they join because they get discounts at gun ranges and other benefits, not because they oppose background checks on gun purchases.

The NRA declined to comment about the documentary by article publication.

Chief among the issues raised in the film is a 1986 bill that dramatically limited the authority of the ATF. The Firearms Owners’ Protection Act was a direct result of the NRA lobbying Congress, said William Vizzard, a 27-year veteran of the ATF. The federal agency, which processes other law enforcement agencies’ requests to trace the origins of firearms used in crimes, has been prohibited for the past 30 years from maintaining a computerized record of gun sales because of the law.

Last year, the agency received more than 364,000 trace requests globally, Guns.com reported. That number has ballooned from just a few thousand in 1989. The ATF receives more than a million records each month that it needs to sift through manually.

“Once we receive about 10,000 boxes in process, the floor will collapse, so we actually have to store the records … in shipping containers outside,” said ATF special agent Charles Houser. 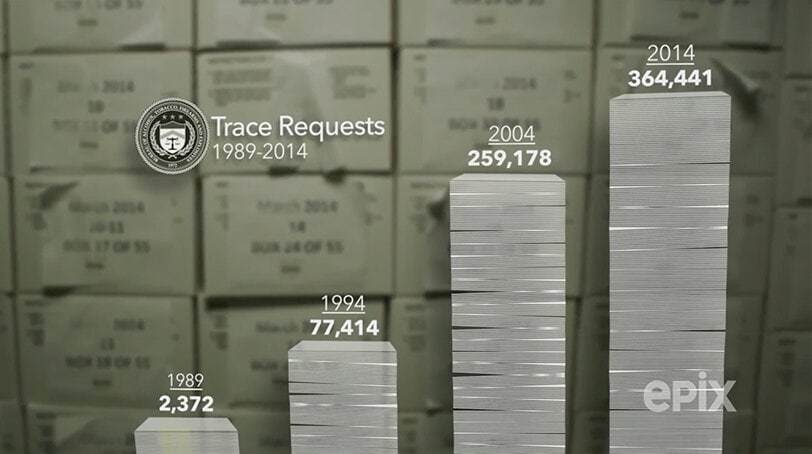 The ATF is also limited to conducting just one inspection of a gun dealer in a year, which it doesn’t have the resources to do anyway because of the sheer number of dealers in the country. There are more than 58,000 nationwide, according to the ATF.

This is important, the Brady Center argues, because 90 percent of guns used in crimes can be traced to 5 percent of the country’s gun dealers.

So, there’s a struggle between tracing these crime guns and maintaining gun rights. An electronic database of gun purchases would make it easier for the ATF to process trace requests that could help to solve crimes, but it would also be a de facto gun registry the government can use to track what guns law-abiding Americans are buying and then use that knowledge to take away their firearms, gun rights advocates argue.

Even some law enforcement agencies think the ATF has a database they can use to quickly process trace requests, but the reality is they’re all processed by hand, leaving about 30 percent of them failing to yield any results for criminal investigators. 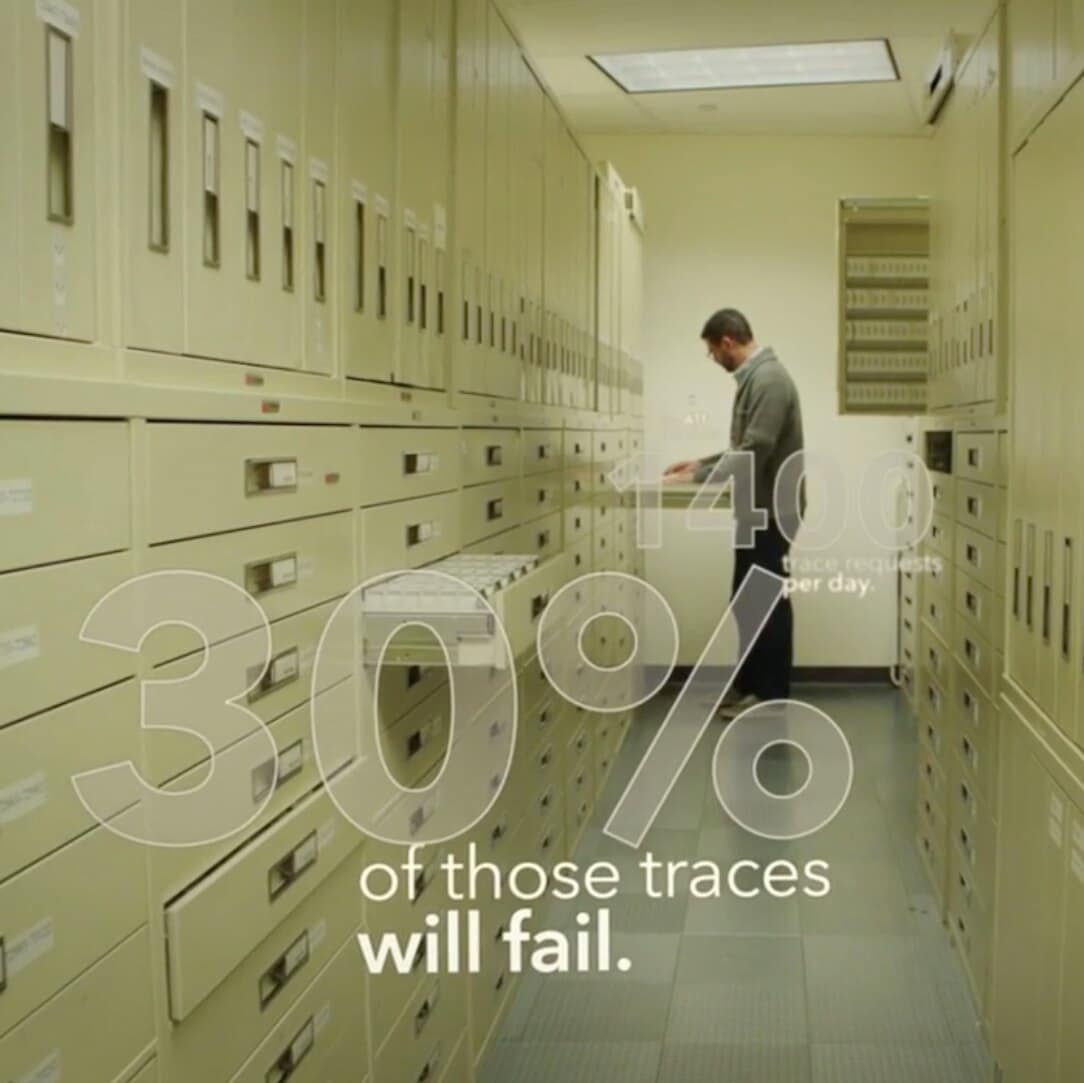 The ATF receives 1,400 trace requests per day and about 30 percent of them will fail. (Image: Epix)

Executive produced and narrated by Couric, the film is set to be released on Sunday, just days before the gun rights group convenes its annual convention in Louisville, Kentucky.

The documentary opens with several people walking into a room, several chairs set up in a circle with all the feel of an Alcoholics Anonymous meeting.

Members of the Virginia Citizens Defense League take their seats and an off-camera voice, Couric, asks the participants by a show of hands, “How many of you are carrying guns now?” to which all of them reply by raising their hands.

What follows is a montage of historic news casts — President Ronald Reagan saying civilians should not be allowed to carry loaded guns in public; the John F. Kennedy assassination; brother Robert Kennedy’s push toward gun control for criminals and the mentally ill and his eventual assassination; the Martin Luther King assassination; President Lyndon B. Johnson’s signing of gun control legislation; and finally a statement by NRA President Harold Glassen in 1968, saying the group has “fought long and hard to keep guns out of the hands of the criminal, the juvenile, the mental misfits.”

Another newscaster fades into view, talking about how the NRA was taken control by a small group of dissidents at its Cincinnati convention in 1977. Another anchor mentions the Reagan assassination attempt in 1981 and another the Firearm Owners Protection Act of 1986, which worked to “weaken this country’s gun control laws,” a reporter says.

Another voice says that violent crime will be increased as a result of this legislation and the timeline advances to 1991 and the mass shooting at a Luby’s cafeteria in Killeen, Texas, or the “worst shooting in U.S. history,” as one news anchor says. 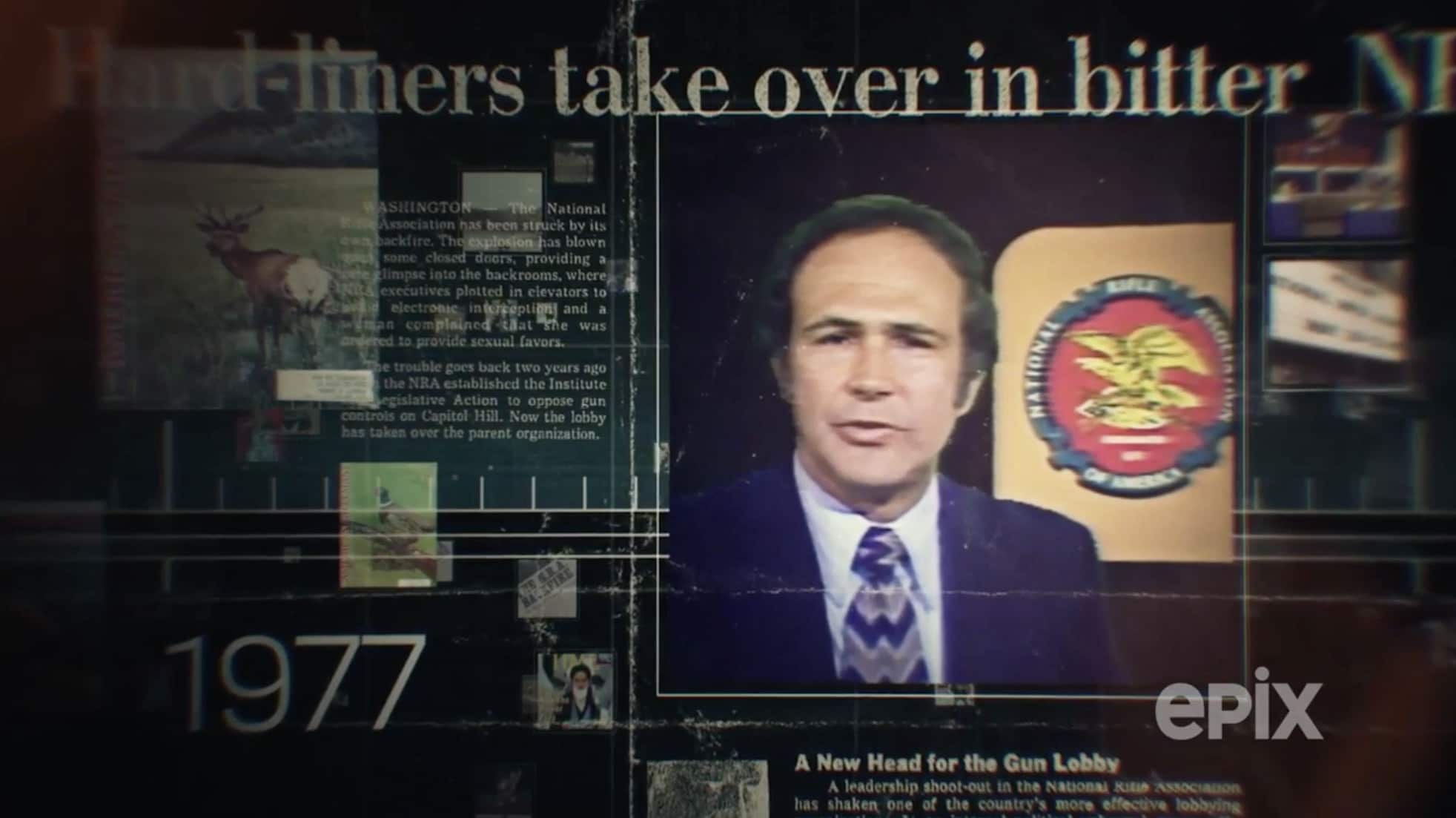 Katie Couric’s “Under the Gun” documentary takes aim at the NRA, who in 1977 was taken control by a small group of radical members. (Image: Epix)

“If you pass the Brady Bill, I’ll sure sign it,” President Bill Clinton says, followed by Wayne La Pierre saying “They will take away every gun you own,” before a cacophony of news reports, newspaper images and presumed images of shooting victims coalesce, then zoom out to form the title of the film over a silhouette of the U.S. An anchor then announces the death toll of the December 2012 Sandy Hook Elementary School shooting — 20 children, six adults.

The impressive motion graphics display sets the tone for the film, which doesn’t do well to mask its agenda of preventing mass shootings and other gun violence at what some may consider the cost of gun rights.

Other names familiar to the gun world are featured, including Open Carry Texas, which did not respond to requests for comment.

Though the film could not convince the NRA to participate, Richard Feldman did make a brief appearance. He’s a former NRA lobbyist and president of the Independent Firearm Owners Association.

Feldman told Guns.com the production team reached out to him about two years ago and said the film would carry no agenda. While he expected a slight gun control slant, Feldman didn’t expect the film’s marketing and education efforts to include the likes of the Brady Campaign and the newfound NRA counterweight Everytown for Gun Safety, which was started when billionaire and former New York Mayor Michael Bloomberg pulled together several advocacy groups under one umbrella two years ago.

“If they were smart, which they’re not, they would have at least linked to the NSSF gun safety website,” Feldman said. “Obviously they don’t know what they are talking about and clearly had an agenda.”

The NRA isn’t the bad guy, Feldman said, but it has been effective in getting its members out to vote.

“Educate, motivate, get our people to the polls on elections day,” Feldman said. “The groups that do that well are called winners.”

But it’s not just the mobilization of its membership. The NRA also uses fear to control legislators, Feldman said.

In his lobbying days, Feldman used to tell lawmakers the NRA stood for “Never Re-elected Again” because it was effective at turning its base against legislators seeking re-election.

“Only gun owners are going to vote for or against you based on your position on guns,” Feldman said.