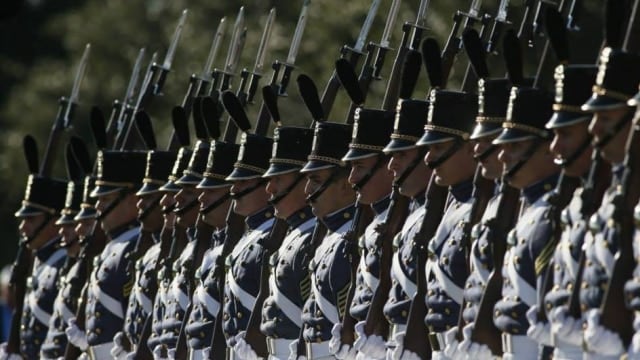 No Islamic headscarves are on the uniform options for the Citadel anytime soon (Photo: Citadel)

After the Military College of South Carolina informed a Class of 2020 cadet that an exception would not be made for her to wear a traditional headscarf, the school may be headed to court.

The unidentified student, accepted to the school and otherwise set to start classes this fall, had asked for the exception to the uniform code in keeping with her faith. Citadel President retired Lt. Gen John Rosa called the student Tuesday and advised her no such exception would be made.

“Uniformity is the cornerstone of this four-year leader development model. The standardization of cadets in apparel, overall appearance, actions and privileges is essential to the learning goals and objectives of the college,” said Rosa in a statement as reported by the Associated Press.

The family, represented by the Council on American-Islamic Relations, said the student in question will not be attending this fall and that they are mulling legal action, citing that Muslim females in the U.S. military currently are allowed to wear a hijab and non-Muslim service women often wear them while deployed in Islamic countries.

Recently, the Army allowed long-term religious accommodations for a Sikh officer, which included wearing his turban with his uniform.

“We defend the right of American Muslims to practice their faiths while participating in all levels of society,” Ibrahim Hooper with the CAIR said.

Though some two-thirds of the school is made up of students from South Carolina, the Corps of Cadets graduating this month includes students from 32 states and six countries. Among the 564 cadets passing out with the class of 2016 are 46 females.