Authorities say a fatal shooting in St. Cloud, Florida, last week stemmed from an argument over a cheeseburger and now a 25-year-old man is facing first-degree murder charges for the death of his brother.

Although Benjamin Middendorf told investigators that he does not drink, authorities learned the victim, Nicholas Middendorf and their mother had been drinking on Cinco De Mayo around 10 p.m. when the incident unfolded.

The 911 call captured the frantic moments following the shooting. 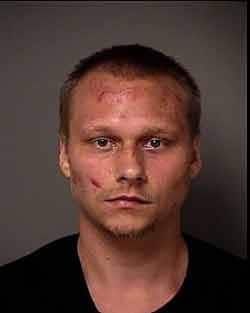 “We were in a fight and I grabbed a gun and I shot him. Oh my god,” Benjamin can be heard saying on the recording, pleading with the dispatcher to send help.

Soon, a second 911 call came in from the young men’s mother.

“My son, just shot my son,” she told the dispatcher and could also be heard telling Benjamin she hopes he goes to jail.

When police arrived, they found 28-year-old Nicholas had been shot in the chest with a 9mm. He was pronounced dead at the scene.

Benjamin was arrested and charged with first-degree murder. He is being held without bond.

Denise Roberts, spokesperson for the St. Cloud Police Department, confirmed that the shooting stemmed from an argument over a cheeseburger. She called the shooting sad, something that could have easily been prevented had Benjamin had the will to hold back his emotions.

“It is Mother’s Day weekend and in this particular case, the mom has lost two sons. One who is deceased and then the other son who is now incarcerated and facing homicide charges,” Roberts said.