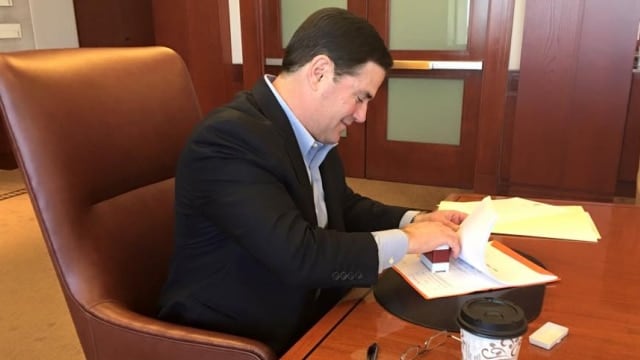 The bills that received a nod from Ducey were SB 1266 which will allow a $50,000 penalty against cities and counties with local gun codes stronger than the state’s and HB 2338 which mandates that schools cannot prohibit possession of an otherwise legal firearm by a person or in a vehicle on an adjacent public right of way.

“Today, I was glad to sign Senate Bill 1266 and House Bill 2338 – two pieces of legislation that protect our Second Amendment rights,” said Ducey in a statement. “Earlier this year I signed House Bill 2224, reinforcing my commitment to allowing the exchange of firearms without government intrusion. I have signed several other firearms bills, with a commitment to safeguarding our liberties relating to firearms.”

SB 1266 will set aside any local rule, ordinance, tax or regulation found in excess of Arizona’s firearms preemption statute. Further, it establishes penalties for violations to include a civil fine of up to $50,000 and removing public officials behind the regulation from office while allowing “a person or organization whose membership is adversely affected by an ordinance” to take the city or county to court seeking to repeal the measure and obtain up to $100,000 in damages as well as court costs and fees.

This sets the stage for two local ordinances adopted by Tucson in 2013 to come under fire once the new law takes effect in August.

However, as reported by the Arizona Daily Sun, Tucson councilman Steve Kozachik is ready to defend the city’s gun codes in court despite the fact that the state’s prior attorney general went on record as saying they were illegal.

“These are reasonable accommodations to public safety,” Kozachik said

“Our constituents, my constituents, have asked for them,” continued Kozachik. “And if the state legislature and the governor want to meet us at the courthouse steps, let’s just do that.”

Gun control advocates, who had called for Ducey to veto the measure citing that it would allow the NRA to sue local officials, denounced the governor’s action.

“Today, Governor Ducey turned his back on local officials who want to help prevent gun violence and save lives in their communities,” said Geneva Haber with Moms Demand Action in a statement. “Instead of listening to his constituents, Governor Ducey stood with the extremist gun lobby and signed a ridiculous piece of legislation that allows the NRA to sue local officials and potentially even fire them – all while making taxpayers foot the bill.”

The second measure signed into law, House Bill 2338, sponsored by Republican Rep. Kelly Townsend of Mesa, codifies that educational institutions cannot prohibit lawfully carried weapons in any highway, street, path, alley or sidewalk even if it borders the school or passes through school property.

Before this week, individuals that did so could be charged with interference or disruption of an educational institution, a felony. Framers of the measure argued for example that travelers on Central Avenue in Phoenix, adjoining the Arizona State University’s campus, were in violation of the law if they had a firearm in their vehicle.

Both successful bills passed the legislature largely on party-line votes.

While holding up his pro-gun credentials, Ducey poured veto ink on a unique measure to create the Uniform Firearms Transfer Compact to help block future laws with relation to the transfer of guns – such as mandates for background checks on private gun sales. Successful with Republicans, the Compact would trump events such as a voter referendum in member states to enact universal background checks.

Nonetheless, Ducey argued it would subrogate Arizona’s rights as a state.

“This bill is unnecessary,” wrote Ducey in his veto letter. “As a strong supporter of the Constitution, the Second Amendment and the Tenth Amendment, I believe it’s important that Arizona continue to chart its own course and retain its sovereignty. I see no reason for Arizona to tie ourselves to other states’ decisions on public policy relating to the transfer of firearms. We know what’s best for our state, and I trust the citizens of Arizona and their elected leaders to continue to make wise decisions to protect our Second Amendment rights, whenever and wherever those rights are infringed.”

The vetoed legislation, HB 2524, would have enacted the compact and prohibited any member states from creating or imposing any fees, taxes, penalties, mandates or regulations, or any civil or criminal liabilities, additional to already existing federal laws with relation to the transfer of firearms.

Member states would have been locked in for 10 years but could withdraw upon unanimous consent of all states in the compact.

The bill had passed the House 35-24 in March and the Senate 18-11 last week, both votes falling short of the 2/3 margin required to override Ducey’s veto.