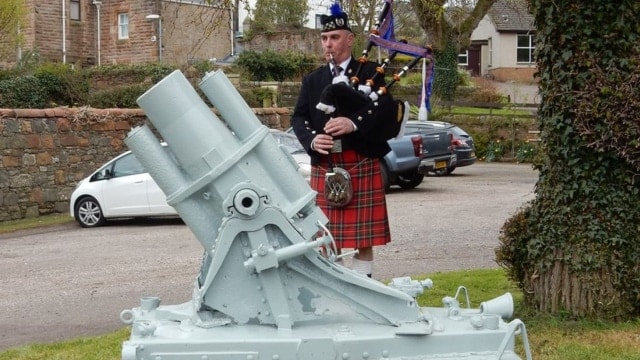 No one knew where the gun came from or just what it was although it had been in town since at least the 1950s. (Photo: BBC)

Willie MacDonald remembered seeing the squat old artillery piece around town as a young boy in the 1950s but never thought decades later he would help save it.

In 1990, MacDonald became the harbormaster in Campbeltown and bumped back into the large caliber piece of hardware from his childhood on a rickety display near the docks. Rusting away, he took it upon himself to paint it black in an effort to help fight the inevitable decay from salt air reads a report on the gun in the April 29th Campbeltown Courier.

Eventually the relic was removed to the local Heritage Center where it was left to rust on the grass, forgotten and unnoticed, as reported by the BBC, townsfolk believed it was a naval gun from Turkey or a harpoon gun of some sort, and were on the verge of getting rid of it. 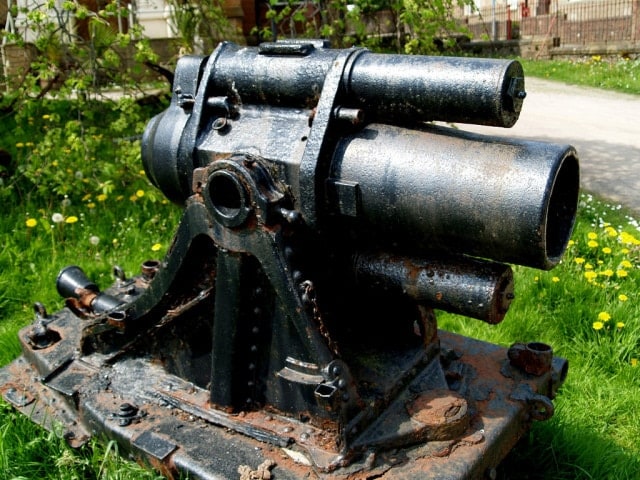 “Initially thought to be a harpoon gun without harpoon in the garden of a heritage centre in Campbeltown, Kintyre. However it may be some sort of naval artillery gun. The heritage centre was closed at the time so we couldn’t ask, ” (Photo: Alan Stewart/Flickr (2008)

Then in the past few months, MacDonald and other local citizens and museum researchers began examining the artillery piece. A local fabrication shop sandblasted away decades of rust and incorrect paint, discovering serial numbers and foundry information that led them to identify the weapon as a 17 cm mittlerer Minenwerfer (mine thrower). 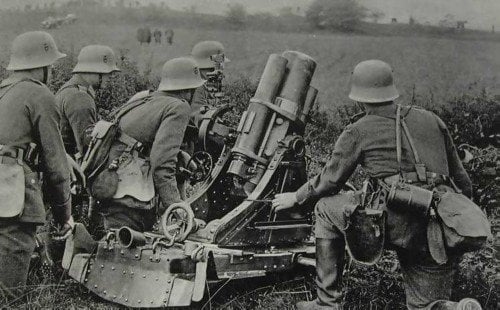 Used in World War I by the Germans to kick a 50-pound shell across No Man’s Land, about 2,300 of the squat mortars were produced, mainly by Rheinmetall in Düsseldorf while Campbeltown’s piece, Nr 5184, was made in Saxony by the Sächsische Maschinen Fabrik.

Further, it turns out to be one of but a handful left in the world, with just one other in the UK– at the Imperial War Museum in London. 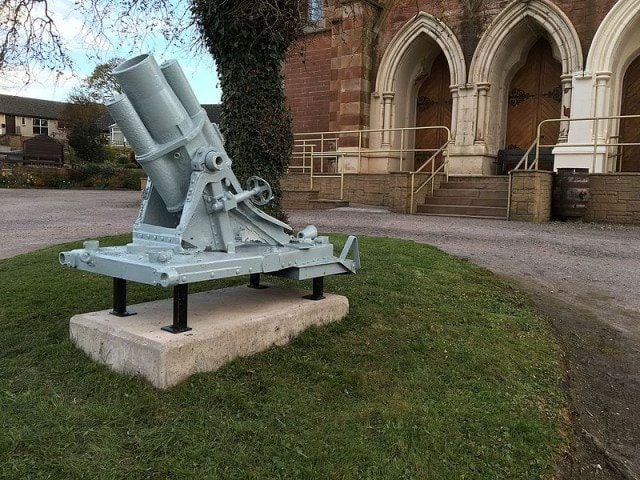 Repainted a more correct grey color, the partially restored and stabilized Minenwerfer was unveiled to the public on May 1 and is on display at the Campbeltown Heritage Center.

Good to see Campbeltown 's minenwerfer back on display. Interpretation by yours truly. pic.twitter.com/FaQjCKUBKN