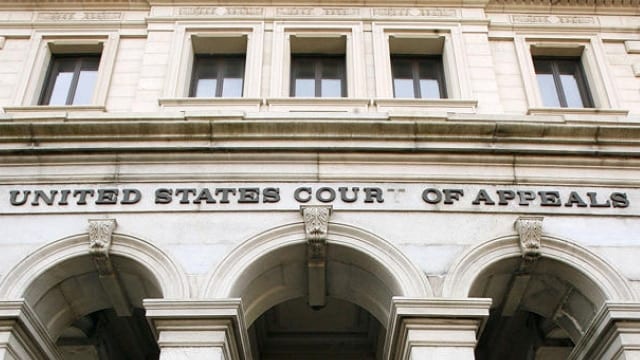 The rehearing took place in front of the full Fourth Circuit at the U.S. Courthouse in Richmond, Virginia. (Photo: CBS News 2)

The long-running challenge to Maryland’s 2013 Firearms Safety Act was heard by the full federal appeals court of the U.S. Fourth Circuit on Wednesday.

In February a three-judge panel for court, citing the ban violated the Second Amendment, kicked the 2014 decision by U.S. District Court Judge Catherine Blake upholding the prohibition back downstairs with the mandate that it be heard with new guidelines, requiring Maryland to prove the restriction argued in Kolbe v. Hogan furthers a compelling interest and is narrowly tailored to achieve that interest.

The Fourth Circuit then followed this up in March with a decision to rehear the case in total by a rare en banc panel of the entire court.

“This case is closer to the facts of Heller than any other case that has come before this court, ” John Parker Sweeney, counsel for the plaintiffs, said in his opening remarks, kicking off over an hour of oral arguments.

Sweeney was put on the defensive early by the panel who centered their questions on the common use of weapons versus their legality under the Second Amendment, with some members drawing a correlation between semi-auto AR-15s and military weapons such as machine guns and howitzers.

Sweeney was able to circle back around and point out that the case before the court was a simpler decision than the nation’s high court had in Heller, which dealt with Washington D.C.’s total ban on handguns.

“This is an easier case, these firearms are almost never used in crime,” he pointed out, citing it was handguns that were used in 94 percent of the homicides in Maryland, rather than long arms. “These firearms are overwhelmingly kept by law-abiding citizens for lawful purposes.”

The 13-member panel was made up of Judges Traxler, Wilkinson, Niemeyer, Motz, King, Gregory, Shedd, Agee, Keenan, Wynn, Diaz, Floyd, and Thacker. Speaking to the political background of the panel’s membership, eight jurists, including Chief Judge Traxler, are appointments by Democratic Presidential administrations while five came from Republicans.

Deputy Chief Maryland Attorney General Matthew Fader argued the state’s case to the court, saying the M-16 and AK-47 were adopted, “by militaries around the world for offensive military-style assaults,” and their civilian semi-auto versions were, “disproportionally used in mass public shootings, disproportionally used in murders of law enforcement officers, and the same cannot be said of other rifles and it cannot be said of shotguns, so for those reasons the legislature determined that they should be banned.”

Fader then spent a half-hour pleading that the subcategory of guns banned under Maryland’s law are “dangerous and unusual” despite the fact that millions are in circulation, saying they were rarely, if ever, used in self-defense and that most defensive gun uses involve few rounds fired, negating the need for a magazine holding a large amount of ammunition.

Sweeney responded to Fader’s argument, reminding the court that the Heller case, as decided by the Supreme Court in 2008, set a precedent of protection of their constitutional rights to keep and bear arms of their choosing to best suit their needs in defense of the home.

“The Second Amendment elevates above all other interests the rights of my plaintiffs to arm themselves in their homes,” said Sweeney. “This is an in-the-home governmental intrusion. And successive panels of this court have said they would apply strict scrutiny if a restriction burdens the core right. That day has come and I would trust that you would do that.”

A ruling in the case is expected this summer.