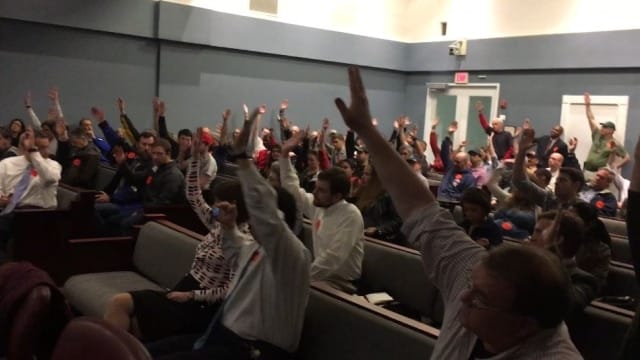 Citizens raising their hands in support of NOVA Armory at the BZA meeting in Arlington late Wednesday night. (Photo: VCDL)

Five Virginia residents challenged the legality of Nova Armory’s Certificate of Occupancy to the Arlington Board of Zoning Appeals, and were resoundingly rejected.

As reported by Arlington Now, Arlington County residents Julia Young, Emily Hughes, Bernadette Brennan, Grace Chan and Nathan Guerrero paid $575 in March to challenge the board’s decision to allow Nova to operate in their current location. The group alleged the store, the only one of its kind in the city, had submitted false information to the county to obtain their permit.

Nova, which opened two months ago, has been locked in a feud with anti-gun protesters in the area, going so far as to sue 64 individuals including several state lawmakers for allegedly trying to pressure it out of business.

The meeting, which saw upwards of 100 pro-gun supporters show up to lobby on Nova’s behalf, urged on by the Virginia Citizens Defense League and the Libertarian Party of Northern Virginia, went decidedly for the shop with the five-member board voting unanimously in favor of Vonhm’s recommendation.

“The anti’s were given 20 minutes to state their case to the BZA, and NOVA Armory’s attorney was only permitted to speak for a maximum of 2 minutes,” posted store owner Dennis Pratte on Nova’s social media page Thursday. “But thanks to the 100+ pro-gun supporters from Arlington that stayed up until 11 p.m. on a Wednesday night to speak to the BZA and have their voices heard, our message, and the message of the Arlington community was heard loud and clear!”