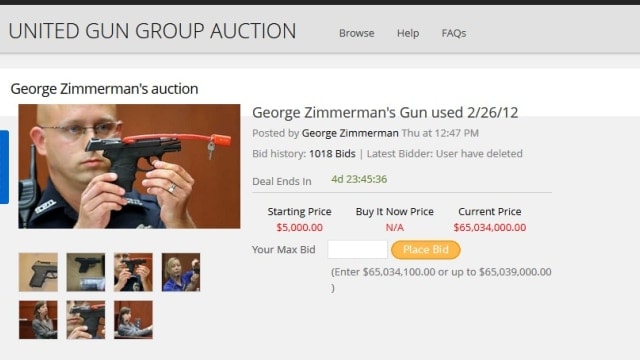 Zimmerman posted a listing for the gun on the United Gun Group forum after the first was pulled from Gunbroker. (Photo: Screenshot)

Update: Just after 10 a.m. on 5/14, the United Gun Group auction was pulled by Zimmerman.

After Gunbroker scuttled George Zimmerman’s user-posted auction for the Kel Tec 9mm used in the Trayvon Martin shooting, a listing on another site topped $65 million.

Listed on user forum United Gun Group just hours after Gunbroker pulled the gun from their service, the site almost immediately crashed and remained intermittently available into the night.

Bidders with user names such as Joe Doe, Deez Nuts, Racist McShootface, Shaniqua Bonifa, and Tamir Rice have fueled the auction to unrealistically high amounts. Bids climbed to over $25 million, then were deleted late Thursday night before climbing again to over $485,000 Friday morning before again being scrubbed.

However, UGG apparently moved to drop the tent on the circus late Thursday night, posting a statement distancing themselves from Zimmerman, as reported by WKMG, the CBS affiliate for Orlando.

“As an organization, we stand by the rule of law and, while no laws have been broken, we do not feel like it is in the best interest of the organization to continue to host this sale on our platform,” United Gun Group posted and then removed. “Our mission is to esteem the Second Amendment and provide a safe and secure platform for firearms enthusiasts and law-abiding citizens; our association with Mr. Zimmerman does not help us achieve that objective.”

The company is also fending off public scrutiny via social media in a series of tweets saying, “FYI, United Gun Group is a free service, we are not being compensated for allowing members to utilize our system,” and “Newsflash people, we do not post auctions. Our members are solely responsible for that.”

Nevertheless, the auction is was still active Friday, set to run for another five days.

Gun control advocates including the Brady Campaign, Campaign to Stop Gun Violence and Moms Demand Action are capitalizing on the resurfacing of Zimmerman in the news to release statements condemning the move to sell the gun while using him as a useful vessel to decry “America’s degenerate gun culture,” as well as “Florida’s dangerous Stand Your Ground law” and legislation that “the gun lobby continues to push for” at the same time.