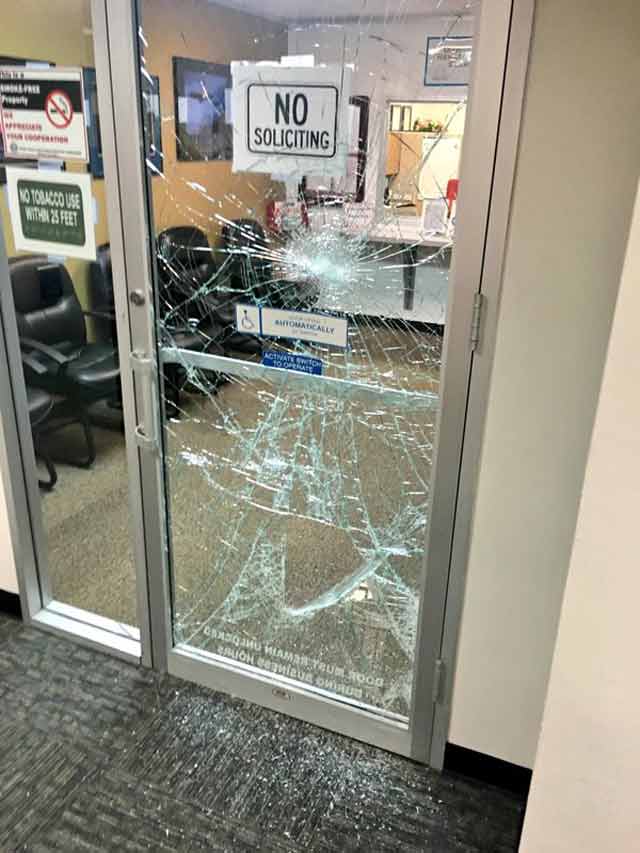 Employees rushed to the back of the business for safety after the man began hitting the door so hard that it broke the glass. (Photo: Click 2 Houston)

A 38-year-old man with mental health issues was shot and killed during a violent episode Wednesday at the Texas Department of Assistive and Rehabilitative Services in Houston.

The man had an appointment with a counselor at the facility, which is located on the fifth floor of the Community Health Choice building, but when he showed up, the staff decided to reschedule after the man said he wasn’t feeling well. As the man left, the employees, which were mostly women, began to get scared so they locked the door.

About the 30 minutes later, the man returned and became enraged.

Detective Willis Huff with the Houston Police Department told KHOU that the man started “making demands and kicking on the doors.” In fact, he was hitting and kicking the door with such force that he broke the glass before he was able to completely kick in the door. By that time, the employees had moved to the back of the business for safety.

Ralph Osborne was at the office, attempting to leave as the man was trying to get in. Osborne told reporters he did what he could to calm the man down, all to no avail. After kicking in the door, the man then moved to a tax consulting business next door.

The owner of the tax business said he became frightened when the man lunged at him, and that’s when he fired a single shot, striking the man in the chest.

Police arrived a short time later and the man, whose name has not been released, was pronounced dead soon thereafter. No other injuries were reported.

The 62-year-old business owner who fired the fatal shot has a license to carry a concealed handgun and a sign hanging outside on the front of the building says open carry is permitted, but Osborne believes the business owner acted in haste.

“I think if they would’ve talked to him, rather than what they did, he’d still be alive,” Osborne said.

“Safety is always of first concern, and our employees followed established safety protocols,” the post stated. “Our thoughts are with those involved.”

The case was transferred to the District Attorney’s office for review by a grand jury. As of Wednesday, no charges had been filed against the business owner.