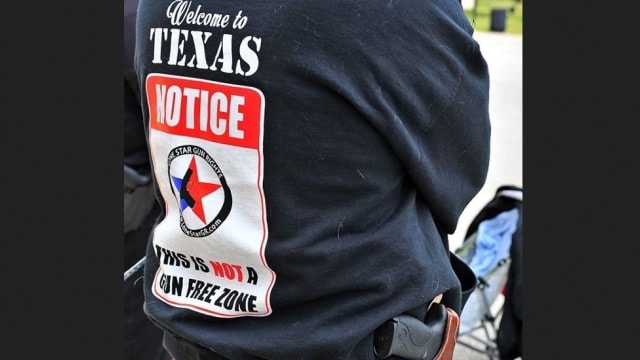 The $140 permit in the Lone Star State can be used for both open and concealed carry. (Photo: Open Carry Texas)

After adopting a program to issue permits for the concealed carry of pistols and revolvers over 20 years ago, the ranks of Texans with a license broke seven figures last month.

Moving to overturn a ban on the carry of weapons outside of the home just after the Civil War, Texas lawmakers sent a bill to bring lawful concealed carry to the waiting veto pen of Gov. Ann Richards in 1993 but her replacement, then-governor and later President George W. Bush, approved the measure in 1995.

By the end of 1996, some 113,640 in the Lone Star State had obtained a permit. Now, as of the end of April, that number stood at 1,017,618, according to Texas Department of Public Safety figures obtained by the New York Times. When compared to the state’s population, this is one active permit per about 27 residents.

Texas saw a huge surge in their numbers last year alone with 217,588 new permits issued to those ranging in age from 18 to 98 including nearly 27 percent of that total to women.

One impetus for the increase is a new law allowing the open carry of handguns to those with a permit, signed by Gov. Greg Abbott last June.

“Throughout 2013 and 2014, we were told no one cares about open carry,” Open Carry Texas founder CJ Grisham told Guns.com Thursday. “The fact that the open carry law has spurred an increased interest in seeking a license to carry is more evidence that the old guard is out of touch. The more individuals that carry legally in Texas, the safer our state will become.”

With that being said, Grisham holds there is still room for improvement in the state’s gun laws.

“It is a shame that Texas is one of only 11 states that require a license to open carry while 34 do not,” he said. “We will continue to fight to make it possible for every law abiding citizen to exercise their right to keep and bear arms without needing a permission slip to do so. Constitutional carry must be a priority for our legislature in 2017 so we can join the other 11 states that recognize this fundamental right.”

Even after topping a million permit holders, Texas is still in second place in the concealed carry game nationwide to Florida. As of the end of April, the Sunshine State had 1,556,578 active individual licenses, or about one per every 13 residents.