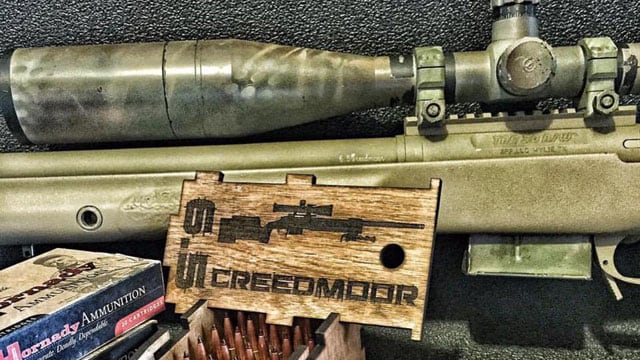 The company says the American Whitetail 6.5 Creedmoor is suitable for North American game, up to and including elk. The ammunition is already available from retailers.

Atop the cartridge is a 129 grain Hornady InterLock bullet with a secant ogive design. Their branded InterLock ring locks the core into the jacket during expansion, to accomplish mass and energy retention.

All calibers in the American Whitetail line are manufactured with select propellants designed to deliver predictable and dependable performance in the field.

Technical data on the round’s performance in comparison to Hornady match or boar loads of the same caliber isn’t currently available.

Hornady is, in a way, catching up with itself in producing a hunting load in this caliber. The company created the 6.5 Creedmoor cartridge, releasing it in 2007. Its intended use was as a match load. Its performance characteristics, however—high velocity combined with a trajectory that’s flat in comparison to other mid- to-long-range cartridges—helped it grow in popularity among hunters.

As a caliber, 6.5 Creedmoor is priced in the same range as its nearest caliber, .308..  It’s more wind resistant and has a longer effective range than .308.  It can be loaded into a .308 magazine and, with a barrel change, shot from a .308 caliber rifle.  It’s an ideal hunting round.  It’s little wonder that Hornady is diversifying within the caliber to meet the needs of hunters.