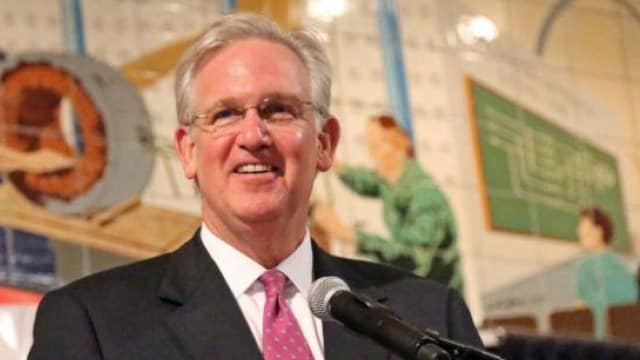 Missouri Gov. Jay Nixon, a Democrat, will have to decide on a sweeping gun reform expansion in coming days. (Gov. Nixon Facebook)

The Show Me State could be the 11th in the U.S. to codify the right to carry a concealed handgun without a permit if legislation on the way to Missouri Gov. Jay Nixon is signed into law.

The proposal allows a person legally able to possess a firearm to carry it concealed anywhere that isn’t already prohibited by law and was approved in a 109-36 vote by the House in April. It passed after conference committee reports as part of a Senate omnibus gun reform measure on Friday. Notably, the final 114-36 House and Senate’s 24-8 vote last week give the measure a veto-proof margin.

“There won’t be blood in the streets,” said Rep. Joe Don McGaugh, R-Carrolton, who helped pass the measure on the last day of session. “But what there will be is more people protected by the right to bear an arm legally.”

The sweeping proposal, SB 656, retains the state’s current permitting program, but maintains that law-abiding citizens who are legally allowed to own and carry a firearm for self-defense can do so without first obtaining such a license or complete training. Since 2014, Missouri sheriffs have issued five-year permits for a $100 fee after a background check and proof of eight-hours of safety training.

The new legislation will also lock in permit fees at current rates; implement 10, 20, and 50-year options and allow some training mandates to be fulfilled with online classes.

The bill also expands Missouri’s castle doctrine and stand your ground protections to use deadly force in specified situations.

State Democrats, who stood in opposition to the proposal, may not have had the votes to stop it, but did go on record as denouncing it as a threat to public safety.

“We’re essentially authorizing a citizen without training to have a firearm, and then another citizen who is afraid that that citizen has a firearm to shoot and kill them,” said Sen. Jason Holsman, D-Kansas City.

The legislation has been the target of television and print ads launched by former New York Mayor Michael Bloomberg’s Everytown group which in turn were fact-checked and condemned by the National Rifle Association. This has left the gun control advocates to push the Governor to veto the measure as their final option.

“This bill would dismantle our current law and make it easier for dangerous people to carry hidden, loaded handguns in public while also turning everyday conflicts into deadly encounters by emboldening people to shoot rather than resolving disagreements in another way,” said Becky Morgan, with the Missouri chapter of Moms Demand Action, in a statement. “We strongly urge our Governor to veto this dangerous legislation—the safety of our communities depends on it.”

The legislation now heads to the desk of Gov. Jay Nixon, a Democrat with a history of vetoing pro-gun legislation only to see it enacted in subsequent veto override action by the legislature.