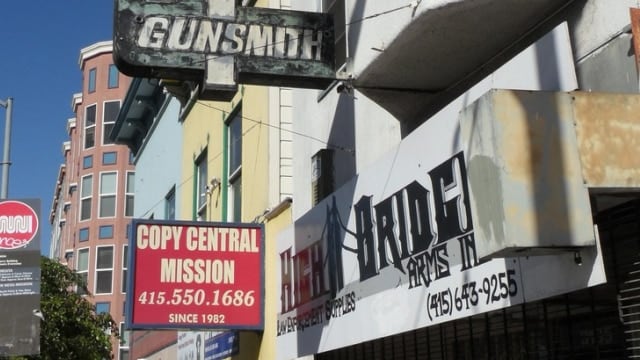 Misson Street’s High Bridge Arms has been a San Francisco fixture since the 1950s, and has a new tenant pending who wants to keep 2/3rds of the old store’s name. (Photo: KQED)

With High Bridge Arms, The Golden Gate City’s final legal gun store run out of town due to increased restrictions last October, a new and very green tenant is ready to move in.

The historic gun shop, founded in 1952 by Olympic competitor and shooting legend Bob Chow, will reopen as the High Bridge Cannabis Club sometime in July.

With over six decades in operation, the store was forced to shutter over a city ordinance pushed by Supervisor Mark Farrell increasing restrictions on gun stores operating in the city to mandate the recording of sales, storing the videos for at least five years, and transmitting data on buyer and firearms to police at least once a week.

“At the end of the day I would much rather see a preschool, a coffee shop, a senior center or some other neighborhood-serving entity that contributes to the vitality of our city in its place,” Farrell said at the time.

Some area residents bemoan that a head shop is coming to the area, joining the over 20 other licensed dispensaries in the city, while those seeking guns have to make a road trip.

“Take a shop that was good for the neighborhood for those of us who actually use guns and have guns. And now, we have to go all the way to San Mateo. It’s just useless,” Jo Lein, a life-long resident of the area, told KTVU.