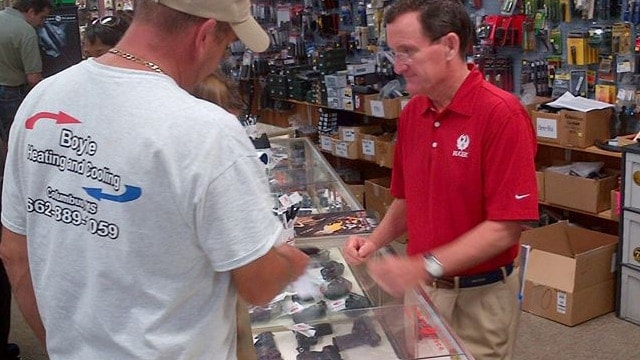 Sturm, Ruger & Company released results of its first quarter of a year that’s on pace to set new records.

Ruger raked in $173.1 million in sales for the first quarter of 2016, up $36.1 million from the year before, according to this month’s filings with the Securities and Exchange Commission. Profits were up by $7.8 million with net income totaling $23.3 million.

The company credits the success to an increase in overall demand, new products, and increase in productivity and product availability. New guns — defined as anything introduced in the past two years — represented $50.3 million, or 29 percent, of firearm sales.

Industry wide, indicators show that gun sales set a new record during the four months in the quarter. The National Instant Criminal Background Check System reported 10.6 million checks from December to the end of March, which is an increase of approximately 2.5 million from the same timeline a year earlier.

Performance details were included in Ruger’s annual report to shareholders. For fiscal year 2015, the Connecticut-based company raked in $551.1 million in sales, which guns made up $545 million.

Ruger’s chief executive officer Mike Fifer explained to shareholders during the May 3 meeting with investors the past, current and future status of the industry, its politics and Ruger’s place in all of it.

“Our industry appears to have been growing overall during the past 10 years as the number of new shooters has steadily increased, as the demographics of shooters have broadened, and as many states have embraced more favorable gun rights laws, particularly, concealed carry laws,” he told the audience.

Citing research by the National Shooting Sports Foundation, slides accompanying the speech identified new target shooters as 50 percent female, 56 percent living in urban or suburban areas, 19 percent as having hunted, 73 percent introduced to guns after the age of 18, and an average age of 32 years old.

“During this time frame, there have been some significant ups and downs in demand as political rhetoric and threats have spurred demand above the underlying normal rate of demand,” he said. “These spikes in demand have then been followed by periods when demand retreated as the threats to gun rights failed to materialize to quite the degree that had caused the spike in the first place.” 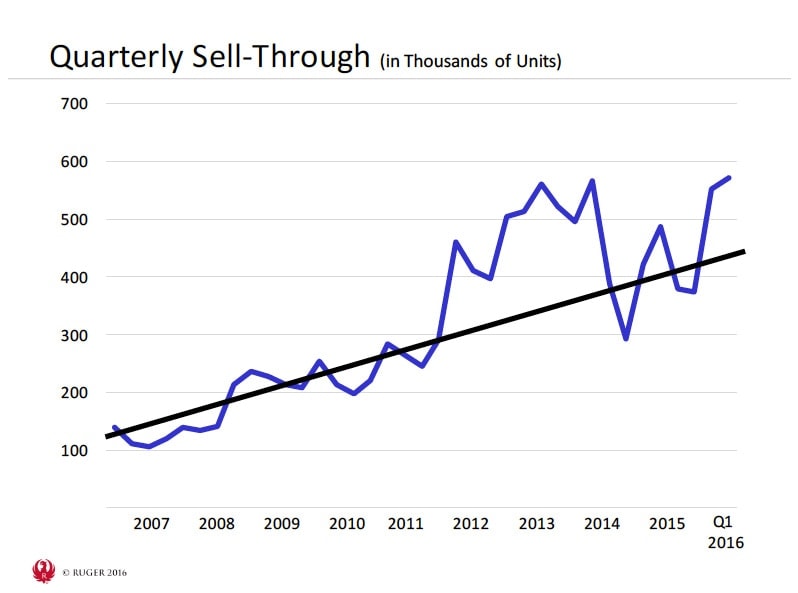 He pointed to a graph showing the quarterly sell-through rate from 2007 to the first quarter of 2016 that shows the rate steadily increasing amid volatility.

“We’ve drawn a straight line in to illustrate the overall growth in demand. There is however no science or clever mathematical formula or regression behind that line. So please do not over interpret it,” he said. “It merely shows that in spite of the cyclical nature of demand for firearms, the overall demand appears to be growing with time.”

However, in 2015, demand returned to seasonal patterns until late in the year. “This spike in demand was strongly correlated to the tragic terrorist activities in Paris and San Bernardino. Demand for firearms for self-defense and concealed carry increased dramatically, and that demand continued through the first quarter of 2016,” Fifer said.

Although there’s pressure to maintain higher levels of revenue, Fifer said they’ve been hesitant to expand by acquiring other companies, much like Ruger’s competitors.

“We don’t think we offer any advantage to the shareholders if we go out and buy a lot of different vaguely related companies. And we all know one conglomerate in our industry that did that, and then I think now more recently has been shedding some of those acquisitions because they turned out not to be terribly synergistic. And so, we’re going to kind of stick to our knitting.”