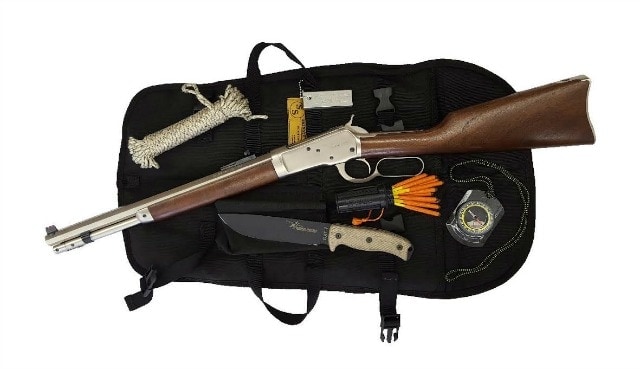 Geared towards survivalists and backcountry enthusiasts the Bush Pilot Survival Kit by Skinner Sights includes essential items for hiking but also introduces a firearm into the package.

The kit comes with a customized Chiappa .44 Magnum takedown lever-action rifle. The rifle features a 6+1 capacity with 16 inch barrel and overall weight of 5.5 pounds. Styled in stainless steel with a walnut stock, the rifle is outfitted with Skinner rear sights and a fiber optic front sight.

Skinner Sights owner Andy Larsson told Guns.com  he wanted to add a modern flare to the Chiappa, but not so much that it took away from the firearm’s purpose. “The lever action carbine is very efficient and has a certain ‘charm’ and ‘nostalgia as well.  I wanted to slightly modernize the time proven platform (sights and finish) while keeping the historic flavor,” he said.

The gun and accoutrements are packed into a Skinner’s Folding Take Down case. The bag features MOLLE attachments to stow the knife sheath and an easy open buckle down flap for quick access. The bag leaves enough extra room for other essentials, such as a 50 round box of ammo.

“After being out on quads, rafts, bush planes, snow machines, boats, etc. it seemed like a good idea to pack a small survival kit that would include a powerful enough firearm for hunting and self defense,” Larsson.

Backcountry hiking does require extra planning and can be a dangerous pastime. In 2012, the National Parks Service reported 2,876 search and rescue missions that ultimately cost $5.2 million. The NPS says those venturing out into the wilderness should always plan ahead and pack basic essentials to keep safe. Some recommended basics include matches, fire starter, compass and knife which all come included in the Bush Pilot Survival kit.

Skinner Sights is best known for producing rifle sights, but this is not Skinner’s first foray into the world of gun kits and bags. In December of 2015, the company released the HTF Garment Concealment Bag. This bag, designed to look like a standard clothing bag, gives gun owners a low-profile means to transport firearms.

The Bush Pilot Survival Kit retails for $1799 and can be purchased through Skinner Sights website.