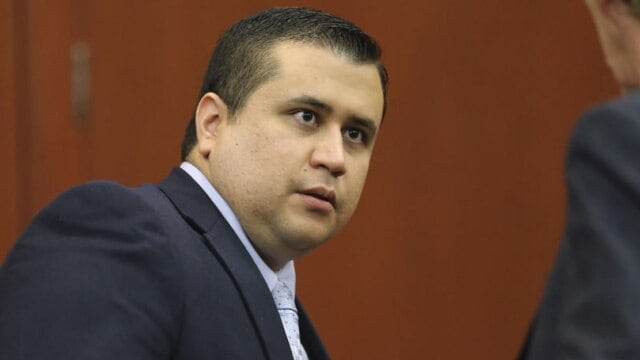 Zimmerman describes the gun as an “American firearms icon” but cautions the pistol still has the case number written on it in silver permanent marker. (Photo: Gary W. Green / Orlando Sentinel)

While figures such as Martin Shkreli have voiced interest acquiring the Kel Tec PF9, George Zimmerman is having a hard time with his auctions for the gun.

The firearm, billed as the one Zimmerman used to defend himself from Trayvon Martin in 2012, was first listed on Gunbroker last Thursday in a 24-hour auction. The online auction house pulled the plug on the listing just minutes after it started, leaving the 32-year old Florida resident to post the 9mm handgun through the United Gun Group forum later that day with a starting bid of $5,000.

Amid website crashes, the auction there bloated to over $65 million in spurious bids from users with such names as Racist McShootface, Shaniqua Bonifa, and Tamir Rice, leading Zimmerman to end the listing of his own accord Saturday.

Now, hoping that the third time is the charm, the gun is listed again on the UGG site with a starting bid price of $100,000 and a “buy it now” of $500,000. Unlike the previous $65 million effort which was a week-long offering, the current auction is set to run a little over a day, beginning May 16 at 9 a.m. and ending at noon on the 17th. Further, Zimmerman has added contact information (GMZfirearm@gmail.com) to the latest auction description where those interested in the gun can email inquiries directly.

Like previous listings, the auction text claims there had been several offers over the years to acquire the gun, including by the Smithsonian Institution, though that organization publicly denies ever seeking out the handgun for its collection.

However, there do appear to be some who are seriously interested in obtaining the gun that was used in evidence during Zimmerman’s second-degree murder trial.

Pharmaceutical executive Martin Shkreli, no stranger to controversy himself, posted, “The only reason I would bid on the Zimmerman gun would be to destroy it or put it in a museum as a disgusting reminder of racism in the US,” to social media though it is unclear if the “pharma bro” intends to back up his tweet with a bid.

A more solid prospective buyer, lifelong gun collector Jeff Posey of Summerville, Ga., has been attempting to contact Zimmerman about purchasing the firearm, reports the Orlando Sentinel. Like Shkreli, he maintains the gun should either be destroyed or put in a museum, both of which he has on the table should he add the gun to his collection.

“There’s no avoiding the fact that someone is going to own it,” said Posey. “And I don’t want to let this gun become some nut job’s kill trophy. The ultimate insult to the Martin family would be allowing some wacko to wave this gun all over YouTube for the next 30 years.”

Two of the largest auction houses in the country, who have in the past sold and resold guns used by the likes of such notorious figures as John Dillinger, Jesse James, Jack Ruby and Bonnie and Clyde, have gone public with the news that Zimmerman approached them prior to his failed online auction attempts only to be rebuffed.

“The man is despicable and I would have nothing to do with his gun,” said James Julia of James D. Julia Auctioneers in Fairfield, Maine, according to Reuters.

Wes Cowan, President of Cowan’s Auctions in Cincinnati even took to social media to repeat his firm’s refusal to attempt to sell Zimmerman’s handgun.

“Yes it’s true. Zimmerman contacted us about selling his gun. He left a message with an employee, and we never called him back. That was that,” he said on the company’s official Facebook account Saturday.