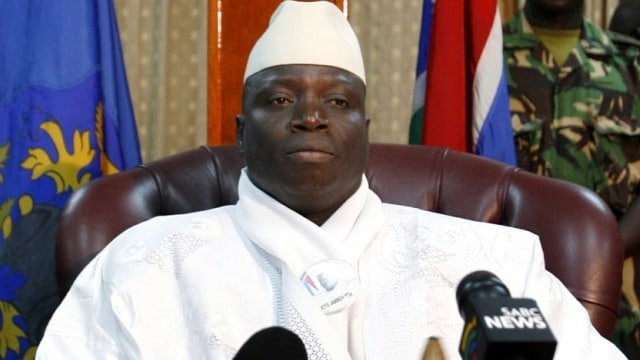 A band of would-be revolutionaries received light sentences last week following their role in a 2014 coup attempt in The Gambia that included smuggling guns hidden in 55-gallon drums.

The four men, Cherno Njie, 58, of Texas; Algie Barrow, 43, of Tennessee; Banka Manneh, 43, of Georgia; and Papa Faal, 47, of Minnesota, came to the attention of the feds two years ago after a coup organized by the group to overthrow strongman President Yahya Jammeh tanked disastrously.

As part of the preparations for the coup, Faal legally bought eight semi-automatic AR-15 style rifles in Minnesota and shipped them to Gambia disassembled and hidden in 55-gallon drums while Njie purchased other weapons, night-vision equipment, body armor and black uniforms for the assault team. Each of the members of the team, who according to the affidavit held various military backgrounds, were paid $4,000 in advance for their service.

After assembling in the West African country of two million early in December 2014, the group settled on a plan to assault the State House, the official residence of the country’s leader. Promised the support of up to 160 sympathetic Gambian soldiers– who never materialized– the assault fell apart after sustaining casualties including at least one death, and the conspirators disbanded.

The men plead guilty to one count each of Conspiracy to violate the Neutrality Act and Conspiracy to possess a firearm in furtherance of a crime of violence with three receiving between six months and 366 days in prison and the fourth, Papa Faal, 47, released with time served.

The government noted the men’s passion for their cause, even giving them a hattip of sorts, but still held they broke the law.

“These defendants conspired to overthrow a foreign government,” said U.S. Attorney Andrew M. Luger in a statement. “Regardless of the legitimacy of their personal and emotional connections to The Gambia, these men placed countless innocents in harm’s way when they engaged in a brazen and fatally flawed attempt at regime change. They violated U.S. laws that exist to protect the foreign policy of our country and all Americans both at home and abroad. While I respect the right of any person to voice opposition to a government or its policies, this case is a good example of how not to do so.”

Meanwhile, Jammeh, in power for the past 21 years, assured his opponents this week he wasn’t going anywhere and plans to remain in power for “a billion years.”