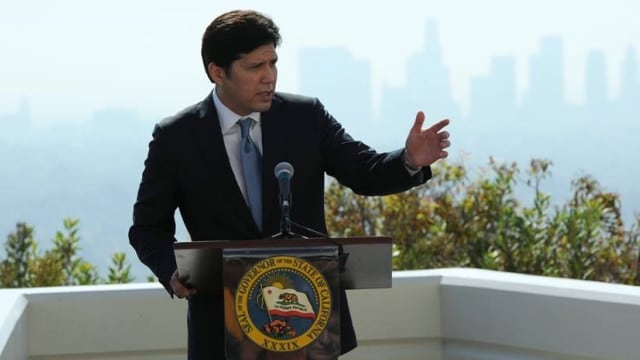 The Democrat-controlled state Senate Appropriations Committee on Monday gave a rubber stamp to a sheaf of measures that would change the landscape of gun laws in California.

The proposals, being rushed through the legislature by Senate President Pro Tem Kevin de León – currently locked in a battle with Lt. Gov. Gavin Newsom over who will lead the charge toward expansive new gun regulations California – confusingly included three duplicate measures crafted from gutted and amended zombie bills left behind by the resignation of a fellow Democrat.

The measures include restrictions on “ghost guns,” retroactive bans on currently grandfathered firearms and magazines going back to 1899, outlawing the use of “bullet buttons,” founding a state-run Firearm Violence Research Center, changing how California defines ammunition  and requiring the reporting of stolen guns. The bills all passed in 5-2 votes along party lines.

“There is a good chance of getting the legislative package of gun-control bills to the Governor,” De Leon said in a letter sent to Newsom last month, arguing state lawmakers are better placed to enact sweeping gun control laws than the Lt. Governor’s own Safety for All ballot initiative.

The measures advanced to the Senate floor include:

SB 880 which aims to revise the definition of “assault weapon” to mean any semiautomatic centerfire rifle, or a semiautomatic pistol that does not have a fixed magazine but has any one of those specified attributes. As such, it goes after the long misunderstood “bullet button” by mandating guns with a fixed magazine would have to be disassembled to remove the magazine. AB 1135, designed to shore up the Kings River East Groundwater Sustainability Agency, is now a carbon copy of SB 880, and was passed along with the elder bill.

SB 894 would make it a crime to not report the theft or loss of a firearm within five days or a recovered gun within 48 hours.

SB 1006 would establish a taxpayer-funded Firearm Violence Research Center at the University of California to study gun violence as a health care issue. The bill would require the university to report, on or before Dec. 31, 2017, and every five years thereafter, specified information regarding the activities of the center and information pertaining to research grants.

SB 1235 started off as a bill relating to public employees’ retirement but was rewritten by De Leon as a mandate to adjust the state’s definition of what constitutes ammunition as a result of the Parker lawsuit which repealed the lawmaker’s previous AB 962. Signed into law by Gov. Schwarzenegger, that bill required the licensing and registration of handgun ammunition sales and even threatened some reloading components as well. AB 156, which formerly dealt with global warming, is a zombie twin of this legislation.

SB 1407 is a reboot of De Leon’s infamous ghost gun legislation of 2014 that was vetoed by Gov. Brown. It would require a California Department of Justice background check and authorization before assembling a firearm in the home of a state resident, which in turn would have to obtain a serial number. Before this could be granted, the candidate would have to show proof that building the gun would not violate local city or county codes. In effect, adding multiple layers of regulation to a process that is already legal under federal law. Moreover it would require all guns, even antiques and homemade weapons, made after 1899 to have a serial number.  AB 857, which would have enacted clean vehicle rules for trucks, buses and off-road vehicles is identical.

AB 1511 was originally designed to establish an energy savings program for the State Energy Resources Conservation and Development Commission, but will instead seek to criminalize loaning someone a firearm unless they are a spouse or registered domestic partner, or to a parent, child, sibling, grandparent, or grandchild of the gun owner.

Second Amendment advocates in the state argue that no matter who wins in the race between De Leon and Newsom, it is gun owners that stand to lose.

“The reasoning behind these pieces of legislation is to beat Lt. Governor Gavin Newsom to the punch, in his push for stricter gun control throughout California,” said the California Rifle and Pistol Association in an email to Guns.com. “What we are seeing is a competition within the party to see who can take away your rights first.”