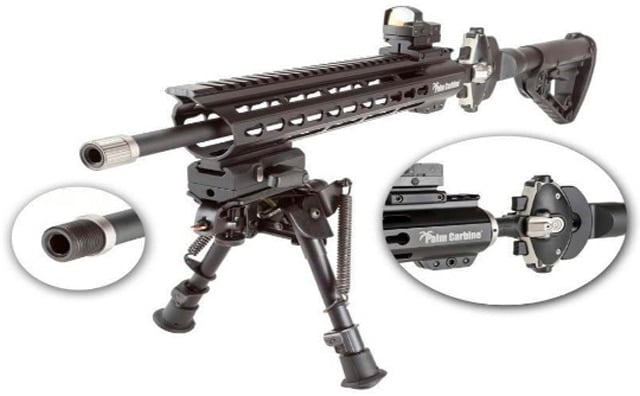 Constitution Arms added another firearm to its lineup of guns geared towards the disabled and elderly. The Palm Carbine is the long arm sister to the Palm Pistol, a T-shaped palm-sized handgun.

Chambered in .38 Special, Constitution Arms has plans to extend to .22LR in the future. Like its predecessor, the Palm Carbine features an ergonomic grip easy to use for those with weak or damaged hands. It is also a single shot firearm, which has some drawn criticism from self defense advocates.

Constitution Arms President Matt Carmel told Guns.com that though he understands the concerns, they aren’t applicable to this firearm. “The carbine is not intended for self‐defense and the fact it only fires a single cartridge at a time is immaterial. Rather, it is intended for competitive target shooting, small game hunting and plinking,” he said.

Carmel’s commitment to extending the Palm product to include a carbine comes from a desire to give disabled and elderly shooters the ability to continue shooting despite limitations.

“A carbine or rifle version is a natural extension into my focus on creating designs that meet the needs of the underserved, if not unserved market, for amputees, disabled, seniors, wounded combat vets and others who due to age, accident or medical conditions cannot fire a traditional firearm,” Carmel said.

The Amputee Coalition estimates nearly 2 million Americans live without a limb. The Coalition, founded in the late 1980’s, is dedicated to supporting and improving the life of amputees and their families. The Palm Carbine and Palm Pistol will make an appearance at the Amputee Coalition’s 2016 National Conference held in Greensboro, North Carolina in June.  The National Conference is an opportunity for amputees and caregivers to convene for networking, education, clinics and adaptive recreation.

Carmel has worked extensively to make the Palm Pistol and Carbine easy to use for those with limitations. He’s also worked alongside medical experts to create rehabilitative exercises incorporating his firearms. These exercises focus on muscle strengthening and restoration of joint motion.

Carmel continues to appeal to the Federal Drug Administration to reclassify the Palm series as medical devices. If the FDA made this move, insurance reimbursement might be possible for customers. Until then buyers must pay the $1850 price tag for the Palm Carbine out of pocket.

The Palm Carbine is still in the production phase with an initial production run of 100 units planned.