FBI: Number of cops killed in the line of duty down in 2015 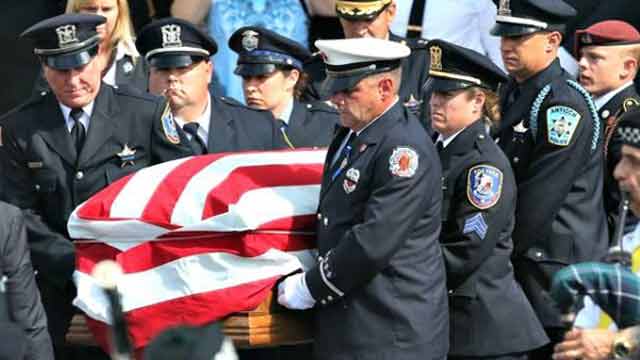 38 of the 41 officers killed in the line of duty last year were shot to death. (Photo: AP)

Although official numbers will not be released until later this year, preliminary data released by the Federal Bureau of Investigation Monday indicates that the number of law enforcement officers feloniously killed in 2015 was down nearly 20 percent from the previous year.

A total of 51 officers were intentionally killed in 2014, but in 2015, the number dropped to 41 officers killed in a total of 38 separate incidents. Following trends from 2014, by national region, it appears that the South is the most dangerous area for law enforcement, with 19 officers killed in 2015. The West saw nine officers lose their lives to criminal acts last year, followed by five in the Midwest and four each in the Northwest as well as Puerto Rico, a press release from the FBI detailed.

The majority of officer deaths occurred as a result of an investigation of suspicious persons or circumstances, followed by tactical situations. Half a dozen officers were killed while conducting traffic stops, while four deaths were the result of ambushes. A total of nine officers – three during each type of situation – were killed in unprovoked attacks and while responding to disturbance calls, including domestic disturbances, and robberies in progress. Two officers lost their lives during altercations with prisoners, and an additional two were killed while dealing with individuals with mental illness. One officer was killed during investigative activity, another while he or she responded to a burglary in progress, and a third was killed while attempting to arrest an individual.

Firearms were the most common type of weapon used to kill the officers, with handguns being the most prevalent, followed by rifles and a single incident involving a shotgun. Vehicles were used as deadly weapons during three incidents.

In addition to those who were intentionally killed, another 45 police officers died in 2015 while on duty, the same number as 2014, with accidents again the number one cause of unintentional deaths.

The full report, Law Enforcement Officers Killed and Assaulted, 2014, will be published in the fall.