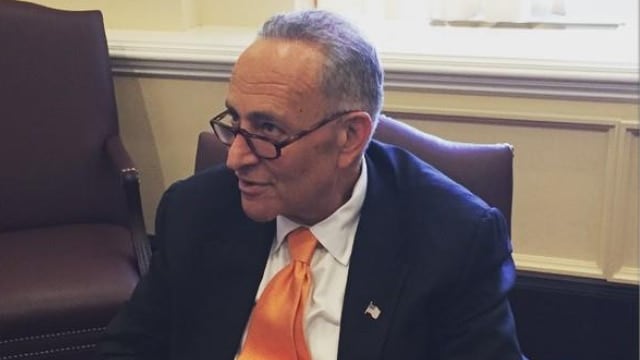 U.S. Sen. Chuck Schumer helped back the first Brady Bill in 1993, and now has returned with an expanded version – after a little prodding. (Photo: Charles Schumer Facebook)

The Brady Campaign this week went after one of the most notoriously anti-gun Democrats on Capitol Hill over an old promise made to seek universal background checks.

On Monday, the Brady group unleashed a social media attack on U.S. Sen. Chuck Schumer, D-NY, releasing a video clip of the senator’s speech he delivered at a gala for the group last November in which he vows to bring up an expanded background check bill in 2016.

“With the first quarter of the year in the rearview mirror, so far Sen. Schumer has failed to deliver on that promise,” wrote the group, directing members to flood the lawmaker’s office with calls demanding what the group calls “Brady Bill 2.0.”

While Schumer’s office did not release a statement on the campaign, which the gun control organization claims directed some 2,000 calls his way in a single day; the New York Democrat did introduce new legislation to the Senate late Monday.

The bill, S. 2934, has five co-sponsors including Sens. Christopher Murphy and Richard Blumenthal of Connecticut and Kirsten Gillibrand of New York. While the full text is not available, the proposal is titled, “A bill to ensure that all individuals who should be prohibited from buying a firearm are listed in the national instant criminal background check system and require a background check for every firearm sale,” which would presumably mandate expanded background checks on private sales.

“Millions of Americans have had enough of the daily terror of gun violence and they desperately need a bill to rally around – a tangible light at the end of the tunnel,” said Brady President Dan Gross in a celebratory statement. “The 2,000 people who picked up their phones just this morning and called Senator Schumer are proof of that.”

While the Brady group went on the offensive against one of the most enduring stalwarts for gun control in Congress, other organizations to include the think-tank Third Way and former New York Mayor Michael Bloomberg’s Everytown for Gun Safety came to Schumer’s defense.

“Senator Schumer has been one of the foremost champions for gun violence prevention during his entire career in public service – including being one of the original authors of the Brady Bill,” Everytown spokesperson Erika Soto-Lamb told Guns.com. “We have no doubt that he will continue to be a passionate and strategic leader for the cause of saving American lives from gun violence.”

The bill has been referred to the Republican-controlled Committee on the Judiciary, and is likely a non-starter in the run-up to a national election in November and the coming end of the 114th Congress.