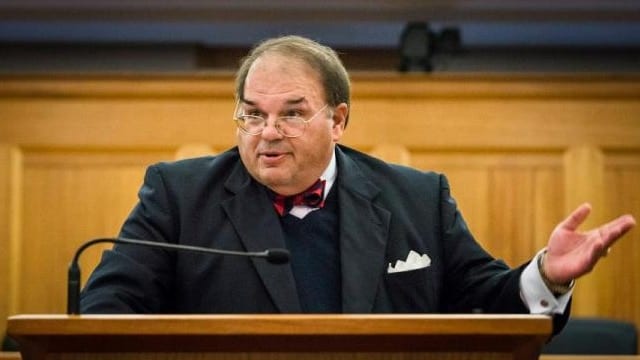 Matthew Grace is a financial advisor and owner of a real estate management company who owns four legally registered handguns in Washington D.C. and has held concealed carry permits from Virginia and Utah.

Although he completed the training required by the Metropolitan Police Department to carry a gun outside the home and last August applied for one of the city’s new but elusive concealed carry permits out of a desire for self-defense, he was turned down in October because he did not “demonstrate a good reason to fear injury” or “demonstrate a proper reason” requirement to obtain a permit despite the fact his wife had been robbed on a public street and he found shell casings in front of his home.

This led him – through the Pink Pistols organization of which he is a member – to file suit against the city and Police Chief Cathy Lanier in her official capacity in federal court last December, which was joined by amicus briefs from the National Rifle Association supporting Grace’s case and those by Everytown for Gun Safety siding with the City.

This week, the court found in Grace’s favor.

“The District’s ‘good reason’ requirement infringes on Second Amendment activity because it does not allow individuals to obtain a license to carry a concealed firearm in public for legitimate self-defense purposes, included for protecting themselves from non-particularized threats faced by the general community and from unanticipated, suddenly arising threats,” wrote Judge Richard J. Leon, a 2002 appointment by President George W. Bush, in his 46-page ruling handed down May 17.

Leon held the nation’s high court, in the 2008 Heller case, assured protections under the Second Amendment at home, while the subsequent McDonald case did so for outside of the home, with both guarding against excessive government regulation.

“The District’s understandable, but overzealous, desire to restrict the right to carry in public a firearm for self-defense to the smallest possible number of law-abiding, responsible citizens is exactly the type of policy choice the Justices had in mind,” noted Leon.

The judge took particular exception to the city’s argument that if no occasion arises where a handgun is needed for self-defense then denying Second Amendment rights to bear arms “cannot cause harm” by quoting the passage and replying “What poppycock!…Once again, defendants, sadly, miss the point.”

With that, Leon found Washington D.C.’s “good reason” clause likely violated the Second Amendment and granted a preliminary injunction against the city from denying applicants who meet all other eligibility requirements.

“This clause was a travesty of justice from its inception,” said Gwendolyn Patton, first speaker of the Pink Pistols in a statement. “It left the free exercise of an inherent human right up to bureaucrats and police officials. If your reason to carry a gun was deemed insufficient — if, by their measure, your reason to carry a gun wasn’t good enough — they could deny you that right with the stroke of a pen and the thump of a rubber stamp. This,” said Patton, “was unacceptable to us,”

“This ruling is great victory for gun rights,” said Gottlieb. “It affirms the ruling in the Second Amendment Foundation’s Wrenn case where the Court of Appeals said that the judge in that case did not have the authority to issue a ruling. Sooner or later we will win this battle against the gun prohibitionists.”

As for the city, it is weighing options, but standing by its practice and will both request a stay on Leon’s order and an appeal.

“We continue to believe our ‘good reason’ requirement for a concealed-carry permit is both constitutional and in line with similar laws in New Jersey, New York and Maryland – all of which have been upheld by federal appeals courts,” said DC Attorney Gen. Karl Racine in a statement.