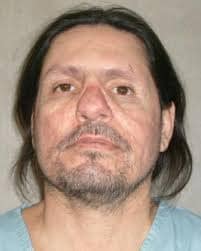 At David Brian Magnan, 53, will live the rest of his days behind bars. (Photo: Seminole County Sheriff’s Office)

A man who escaped the death penalty on a technicality was sentenced to three consecutive life sentences in an Oklahoma federal court Wednesday for a triple homicide that happened more than a decade ago.

In 2004, David Brian Magnan murdered three people in cold blood and for that the state sentenced him to death, but the sentence was reversed in 2013 because the state lacked authority over the crime — his victims were natives and the incident occurred on an Indian reservation.

But after sorting out jurisdictional issues, the Justice Department announced Wednesday that justice had finally been served.

“Twelve years have passed since these three innocent victims were brutally murdered,” said Mark Green, U.S. Attorney for the Eastern District of Oklahoma. “This case has traveled through many courts, both state and federal. Finally, today there can be closure for these families. I sincerely thank the prosecution team for a job well done!”

In the early morning hours of March 2, 2004, Magnan returned to a home where he had attended a birthday party the night before. As he approached the house, he got into a fight with a man that ended with the man getting shot in the stomach.

Magnan then went inside the home and executed homeowner James Howard, Karen Wolf and Lucilla McGirt as they were asleep inside. Both Howard and Wolf died at he scene, but McGirt lived two more weeks before succumbing to her injuries. However, in that time she was able to positively identify Magnan as the shooter. Along with her testimony, investigators found the handgun that Magnan attempted to hide.

Magnan admitted to investigators what he had done and he was charged with three counts of first-degree murder and one count of shooting with intent to kill. Following a trial, he was sentenced to death for the murder charges and life imprisonment for the remaining charge.

According to court documents, Magnan was on supervised release for more than two months before the case was turned over to federal officials. Now, Magnan will serve three consecutive life sentences, along with a 36-month sentence for a prior federal arson conviction.

Assistant Attorney General Leslie Caldwell noted that Magnan will finally be held accountable for the crimes he committed.

“After waiting many years for some closure, I hope the families of the defendant’s victims take some solace in today’s sentences,” she said.